The project – completed under the direction of renowned organ designer Martin Pasi – entailed adding nearly 3,000 new pipes to the instrument, which was built by Walter Holtkamp Sr. and dates back to when the church (designed by famed architect Marcel Breuer) was dedicated in 1961.

Following the expansion, the organ now boasts over 6,000 pipes in all. Some of the new ones are the size of pencils while others are nearly 850 pounds. A number of them – including wooden ones so large a slim adult can fit inside – were built on-campus in Collegeville in the Abbey’s woodworking shop.

“This is a very big deal,” said Koopmann, a former university president and a longtime professor of music at Saint John’s, who has been playing the organ for decades. “This organ now takes its place alongside the great organs of Europe – many of which are also monastic organs.

“The sound perfectly fills the trapezoidal shape of the church and it’s absolutely incredible to hear. Martin Pasi is such an artist. He’s perfectly matched the sound of the old instrument with the new additions.”

The expansion project was completed in May 2020. But the ongoing COVID-19 pandemic meant plans for an official blessing/dedication ceremony had to be postponed several times.

It is now scheduled for the weekend of Sept. 18-19. Events kick off with the Solemn Blessing of the Expanded Holtkamp-Pasi Pipe Organ at 7 p.m. Saturday, Sept. 18. Abbot John Klassen, OSB will preside.

And it will include the world premiere of organ piece “Three Intermezzi for Organ, composed by William Bolcom and commissioned by the Saint John’s Abbey thanks to a donation from Jeff ’87 and Jamie Barnett

The festivities continue at 2 p.m. on Sunday, Sept. 19 with the presentation of the organ featuring Koopman and Michael Barone of American Public Media’s Pipedreams program which focuses on pipe organs.

The Inaugural Dedication Recital, featuring various performances by graduates of the College of Saint Benedict, Saint John’s University and Saint John's School of Theology and Seminary, is scheduled for 3 p.m.

“The university chorus will be singing at the blessing,” Ruff said. “I already know of people who plan to fly in for this. It’s a really exciting time.

“It’s going to be an historic weekend in Collegeville.”

And it’s just the start of what will be a year-long celebration. Already, a c oncert featuring the Canadian Brass with organist Greg Zelek has been scheduled for Saturday, Feb 26, 2022.

“We’re finally going to be able to share the incredible sound of this organ with everyone,” Koopmann said. “And people who hear it for the first time are going to be amazed.” 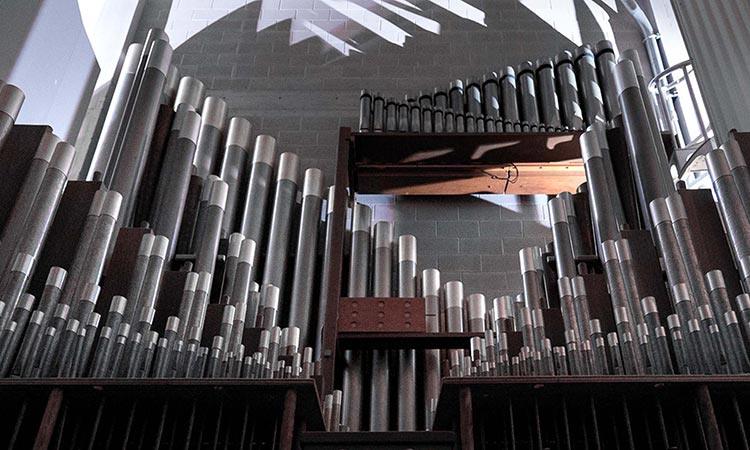