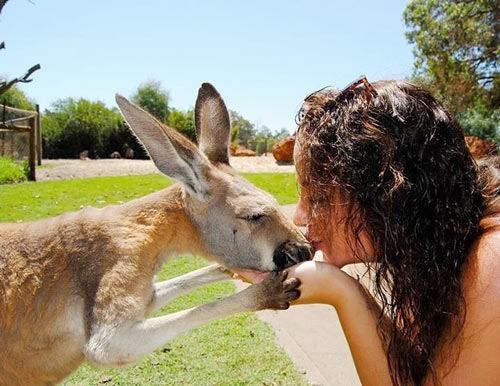 A CSB student gets up close and personal with a kangaroo during her study abroad experience in Australia.

Sometimes, 13 is considered to be an unlucky number.

But not for the College of Saint Benedict and Saint John’s University, when it comes to study abroad.

For the 13th consecutive year, CSB and SJU are ranked among the top baccalaureate schools nationally for the total number of students who studied abroad.

That was one of the findings of Open Doors 2017, the annual report on international education published by the Institute of International Education (IIE).

“CSB/SJU’s rankings in the Open Doors report confirm our commitment to study abroad as an integral component of an undergraduate education,” said Barb May, academic dean and interim director of the Center for Global Education at CSB and SJU. “We strive to help our students develop a culturally diverse and global perspective that is so important in today’s world.”

May pointed out that students from CSB and SJU visit diverse parts of the world, including India, China, Japan, Australia and Fiji, Guatemala, Chile, Ecuador, Sweden, Ireland, Greece and Italy.

“Not only do students participate in coursework while abroad, but internships, service learning, and other experiential opportunities exist in many of our programs,” May said. “Study abroad provides unforgettable experiences that can transform a student’s perspective and learning.”

The 2017 Open Doors report found that 325,339 Americans studied abroad for academic credit from their colleges and universities in 2015-16. That represented an increase of 3.8 percent over 2014-15. The leading destinations for U.S. students are (in order) the United Kingdom, Italy and Spain.

International students studying at U.S. colleges and universities was a record 1,078,822 students in 2016-17 (an increase of 3.4 percent), topping the 1 million mark for the second consecutive academic year. The top origin countries for students coming to the U.S. were (in order) China, India and South Korea.