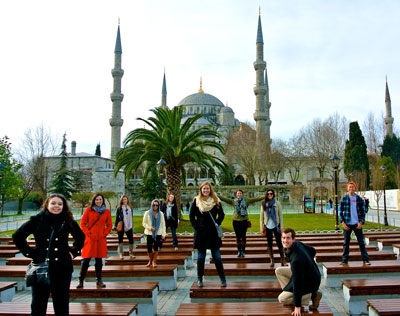 A group of CSB and SJU students who studied abroad in spring 2013.

The College of Saint Benedict and Saint John's University are highly ranked in three different categories according to Open Doors 2014, the annual report on international education published by the Institute of International Education (IIE), which was released Monday, Nov. 17.

CSB and SJU are ranked among the top schools nationally for study abroad students, as well as international students studying in the U.S.

"The 2014 Open Doors report confirms that study abroad is a valued part of students' education at CSB and SJU," said Nicole Clements, interim director of the Office of Education Abroad at CSB and SJU. "While I am proud that we continue to be a leader in study abroad participation rates, I am even more proud of the high-quality international programs that we provide for our students. It is remarkable that even as national trends shift toward shorter study abroad experiences, CSB and SJU remain strong in our signature faculty-led, semester study abroad programs."

Before graduating, 63 percent of CSB students and 48 percent of SJU students will participate in a study abroad program. There are 19 semester-long programs administered by CSB and SJU, including 15 faculty-led programs located in 16 countries on six continents.

During the 2012-13 school year, a total of 289,408 U.S. students studied abroad for credit, an increase of 2.1 percent over the previous year. U.S. student participation in study abroad has more than tripled over the past two decades. The leading destinations for U.S. students to study abroad were the United Kingdom (36,210 students), Italy (29,848) and Spain (26,480).

CSB and SJU rank second among Minnesota baccalaureate schools with the number of international students on campus.

The new Open Doors data was released on the occasion of the 15th annual celebration of International Education Week, a joint initiative of the U.S. Department of State and the U.S. Department of Education to prepare Americans for a global environment and attract future leaders from abroad to study, learn and exchange experiences in the United States. The overall number of international students in the U.S. has grown by 72 percent since the first International Education Week briefing was held in 2000.