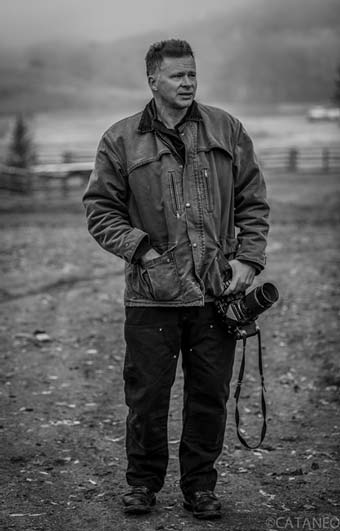 That interest led Crouser to a photography career, and his career has produced the latest exhibit at the Saint John’s Art Center.

“Mountain Ranch: Traditional Images of Traditional Lives” is on display through Oct. 20 at the Alice R. Rogers Gallery and Target Gallery as part of the Visual Arts Series at the College of Saint Benedict and Saint John’s University.

The exhibit, which is free and open to the public, features photographs from Crouser’s third book, “Mountain Ranch.” It explores the disappearing world of cattle ranching in the mountains of Colorado. The exhibit also includes work from his first two books: “Los Toros,” a book on bullfighting around the world, and “Dog Run,” a series on the intense play of dogs in urban dog parks.

It’s a homecoming for Crouser, a 1985 graduate of Saint John’s University, whose work is being featured on campus for the second time.

“I’m very proud of my connection with Saint John’s,” said Crouser, who majored in English at SJU.

However, Crouser’s connection to photography came a bit earlier in life. An industrial arts class at West Junior High in Hopkins, Minnesota, created a spark for the teenager.

“We were doing darkroom work, developing film and making prints, and I found it just an amazing process. It really intrigued me,” Crouser said.

So, he did what any child would do.

“But I’ve never been without a darkroom ever since,” he said.

“It’s not a decision based on advantage, it’s a decision based on preference,” Crouser said. “I really prefer the craft of what I call tactile photography. That means you touch every aspect of it, the film you put in and take out of the camera, the developing of the film, the drying of your film in the air and the considering of the images to glass and projecting them down to paper.

“It’s all very touchable from start to finish, and I prefer that as a craft to the computer,” Crouser said.

Crouser spent parts of 10 years in Colorado shooting nine different ranching families. His pictures capture the hard life of the cowboys working in all kinds of weather and terrain.

“Faceoff in the Valley” shows a lone cowboy on horseback deep in a valley chasing a couple of wayward cattle. “Branding” features several cowboys trying to brand an uncooperative steer. And, “Moving Cows” shows a cowboy moving a herd of cows.

“Those pictures are all ones in which I was trying to show the setting in which all this work takes place. It is a hard, rough kind of life,” Crouser said. “That’s kind of what attracts me to it.

“I find disappearing cultures interesting. The rough, physical way of life is also interesting to me, to watch people just working in sort of a dangerous, rough kind of fashion, and just matter of fact go about their business. The average person would consider this to be such an adventure, but to them, it’s just the way they grew up and the way they still work,” Crouser said.

Jill Dubbeldee Kuhn, the gallery manager of the Art Center, said she can appreciate Crouser’s photos having grown up on a farm.

“There’s always work. Your work is never done. You have that routine, and yet things happen that are unexpected and you need to deal with it,” Dubbeldee Kuhn said. “I think Michael’s photos capture that rhythm and beauty in which at times looks very peaceful, and at other times looks very grueling.”

Crouser is working on a new photography book, “Saint John’s Through the Years,” which will feature archival photos from SJU. The book will include an introduction from Peggy Roske, CSB/SJU archivist.

“I’m quite excited about editing and publishing this book on Saint John’s, and the people at school have been very supportive of that,” Crouser said. The book can be pre-ordered through the website www.stjohnsbook.com (the site is not currently active), with release scheduled for Christmas.