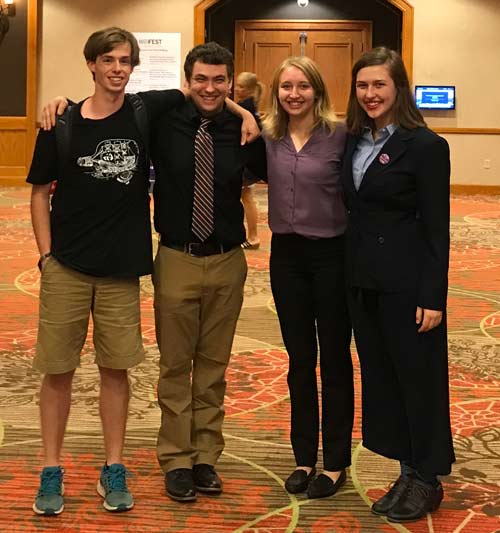 Four students from the College of Saint Benedict and Saint John’s University got an early start on the 2018-19 academic year.

The students presented their research at the annual Mathematical Association of America MathFest Aug. 1-4 at the downtown Denver Sheraton Hotel.

Jake Kirsch, a senior math major from Eden Prairie, Minnesota, earned a $150 award and a certificate for his research on “Artificial Intelligence: Learning with Artificial Neural Networks.” His adviser is Kris Nairn, associate professor of mathematics at CSB and SJU.

“An Artificial Neural Network is basically a statistical model used to make predictions,” Kirsch said.  “Historically, these models have been and are being used on Wall Street, in self driving cars, in your cell phones, in medical technology and more.

Also presenting at MathFest from CSB and SJU were:

Each presented a 15-minute talk, including questions from the audience. There were 177 undergraduate presentations at MathFest, according to Sibley.

“It (MathFest) was a great opportunity to be exposed to fields of mathematics that I didn't even know undergraduate students studied,” Kirsch said. “I learned a lot. I also enjoyed the opportunity to explore Denver. I met some amazing people and saw some amazing things, not only at the conference, but all around the Denver area.”

Kirsch, who worked on the project for the last three months, thanked Nairn for her help with his research.

“I proposed the research, so (Nairn) mostly let me run free,” Kirsch said. “She did, however, make sure I was asking the correct questions, and always pushed me in a new direction in our meetings.”

In the last three years, 11 CSB and SJU students have presented their research at MathFest, Sibley said.