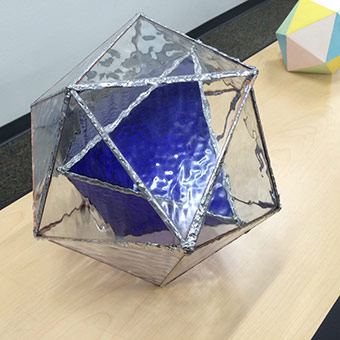 The glass cabinet two doors down from Tom Sibley’s office on the second floor of the Main Building at the College of Saint Benedict is empty no more.

That’s thanks to the efforts of Sibley, professor of mathematics at CSB and Saint John’s University, and students Genevieve Ahlstrom and Michael Lah.

The trio put together what Sibley calls a “Platonic Encounter” because the two shapes are often called Platonic solids and they are encountering each other.

The sculpture is slightly larger than a basketball and is an eight-sided octahedron made of blue stained glass inside a 20-sided icosahedron in clear glass. Think of it like the old ship-in-a-bottle model.

“It’s the perfect collision of mathematical precision and not precise human interaction in making those things,” said Lah, a mathematics major and secondary education minor from Ely, Minnesota, who is currently student teaching at Paynesville (Minnesota) Middle and High School.

“He (Sibley) emailed me, because I took geometry two years ago,” said Ahlstrom, a senior mathematics major and secondary education minor from White Bear Lake, Minnesota, who is currently student teaching at Sartell (Minnesota) Middle School. “I probably will never be able to do something like that again.”

“I really enjoyed working with Genevieve and Michael on this project,” Sibley said. “I’ve enjoyed teaching them, and they’re great students. Now that they’re student teaching, I’m sure they’re going to be great teachers.”

They turned out to be great builders as well. Just how did they accomplish building this 3D object?

Working both individually and together, they estimated that the object took approximately 30 hours to make spread over roughly 10 weeks of fall semester.

Because none of the angles on either the octahedron or the icosahedron were at a right (or 90-degree) angle, Sibley had Todd Johnson, associate professor of physics at CSB and SJU, design “cradles” that would hold the glass pieces, where they would be soldered together. The cradle for the octahedron was slightly more than a 109-degree angle; the second cradle for the icosahedron was slightly more than a 138-degree angle.

As Ahlstrom said, she never thought soldering would be part of her college education.

“The final steps were tough, because you had to rotate it and keep it steady,” Lah said.

“And, keep it together,” Ahlstrom said.

“You’re putting two pieces of glass at a weird angle, and they (the glass pieces) want to lay flat. It took a while to get that down past,” Lah said.

Gary Terhaar, owner of TerHaar Stained Glass Studio in Cold Spring, Minnesota, said that the three-dimensional stained glass sculpture was unique and had never seen another example of this work. He supplied the glass for the project.

Both students were asked what they learned from the experience.

“I think it’s patience, and just how to work with your hands more,” Ahlstrom said.

“There’s something amazing about stained glass. It’s beautiful,” Lah said. “It’s just like the Abbey (and University) Church – all those big stained glass windows. To do a three-dimensional stained glass figure, when am I going to do that? I won’t.”

“They were wonderful, both as artists and mathematicians,” Sibley said of the two students. “I did most of the computations. I think they had to visualize what they were going to do, and how it was going to fit together.

“That’s something that takes experience. We worked hard in geometry on visualization,” Sibley added.

“It’s always good to find creative ways to get kids interested in something like this, to build it,” Lah said. “People need to create.”

And, fill up that glass cabinet.