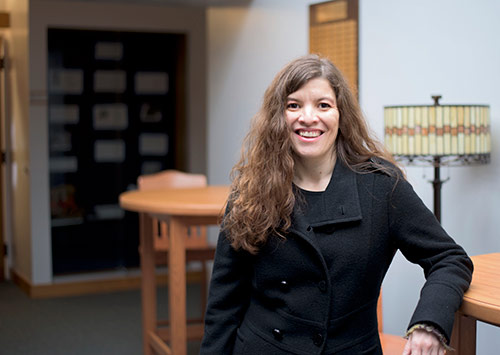 The second lecture in the Latino/Latin American Studies Spring Series will explore indigenous peoples’ resistance to the impacts of mineral extraction and the voracious consumption of water by mining companies in South America.

“Culture as Resistance in the Chilean Andes: An Indigenous Community’s Struggle for their Rights and Recognition in the Face of Mining” will be presented by Anita Carrasco at 7 p.m. Wednesday, March 25, at the Centenary Room (room 264), Quadrangle Building, Saint John’s University. Her lecture is free and open to the public.

The theme of the Spring Series is “Social Movements in the Americas: Power, Rights and Resources.”

Carrasco, an assistant professor of anthropology at Luther College in Decorah, Iowa, will examine Likantatay, an urban indigenous community located in Calama, Chile – the gateway to the Atacama Desert. In 1991, a group of 36 Atacameño immigrant families, driven by the marginal conditions in which they lived in the city, settled in a former pasturing zone in the poverty belt of the city.

It was barren land with no public services or houses to live in. These families had to build their homes from the ground up. Most were slum dwellings with dirt floors and makeshift construction.

From its beginnings, the people of Likantatay asserted that their main objective has been to reproduce their “traditional” Atacameño community, but in an urban space.

Carrasco’s lecture will address the struggles Likantatay faces – the impacts of copper mining on their community, their displacements from a rural lifestyle because company’s extraction of water in the desert to the threat of a forced resettlement.

Carrasco received her Ph.D. in Cultural Anthropology from the University of Arizona in 2011.

She has conducted ethnographic fieldwork in northern Chile for two decades. Her forthcoming book “Embracing the Anaconda: A Chronicle of Atacameño Life and Mining in the Andes” (Lexington Books) will be available in bookstores at the end of spring. Her research “centers on the impacts of mining on the environment and indigenous people’s livelihoods and culture,” according to her biography on Luther College’s website.

“I developed a fascination with understanding how culture shapes the way people view the world and others in it,” Carrasco said on the website. She grew up in a small mining town in Chile before moving to Australia at the age of nine. “Other children were asking me if there were computers where I came from, if we slept on beds, and if we wore feathers on our heads,” she said.

This experience is what lead her to study anthropology and conduct research on indigenous mining towns.

Roy Wagner, one of the world’s most influential anthropologists, wrote “The Invention of Culture,” a book that explores the idea of culture as an art form. Wagner also presents the idea that creation makes culture visible. In her lecture, Carrasco will use these ideas to discuss Likantatay’s struggles and survival.

“Culture as Resistance in the Chilean Andes: An Indigenous Community’s Struggle for their Rights and Recognition in the Face of Mining” is the second of three lectures in the LLAS Spring Event Series. The final lecture is April 14, and will be presented by Pedro dos Santos, associate professor of political science at the College of Saint Benedict and SJU, on “Women’s Movements Inside and Outside the State of Brazil.”