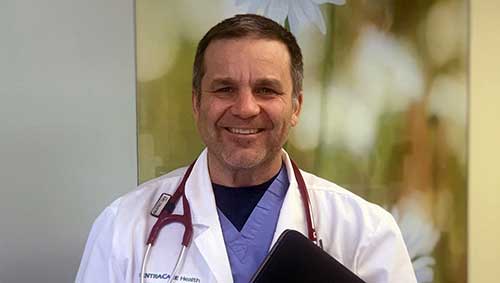 Kurt Schwieters isn’t the biggest fan of social media. Until March of this year, the physician and 1988 graduate of Saint John’s University didn’t use it much at all.

But with the onset of the ongoing COVID-19 pandemic, the Melrose resident and family medical doctor with CentraCare also saw its potential as a tool to cut through some of the speculation and anxiety the virus has brought on and spread timely and factual information – to his patients and to a wider audience beyond.

That’s why he began a Facebook group titled “Dr. Kurt: A Reliable COVID-19 Update.” In just a month-and-a-half, it has grown to nearly 1,900 members and features posts with updated information, advice for coping with stress the pandemic has created and links to helpful tips, contact information and resources.

It also features an ongoing series of Facebook Live chats in which Schwieters and others, including his wife Mary (also a physician and a 1988 College of Saint Benedict graduate), present information and interact with viewers – including taking questions they may have.

“In early March, while my daughter was studying in Spain, I began learning about the coronavirus and its trending effects in China, South Korea and Europe,” he said. “As I learned, I started paying attention to how this virus and disease was being portrayed in the media, and how the mitigation was being perceived in Europe. It became obvious to me that this disease and the effects of mitigation would cause much uncertainty, anxiety and fear.

“What I saw was a set-up for fear and decisions and reactions based on fear,” he continued. “I felt that helping (people) deal with this in a calm, informed and nonjudgmental way, while creating options for self-care and growth, would be a way for all of us to be able to face these uncertainties.”

As a sports fan, Schwieters uses a baseball analogy to describe a lot of the opinion and speculation being offered from all sides as society attempts to come to grips with the spread of a brand-new (novel) virus.

“We’re still in the second inning of a nine-inning game,” he said. “And trying to evaluate whether a particular move is a good one or not isn’t always possible as it’s happening. That’s something that can’t fully be declared until the game is over, and we’re a long way from that yet.”

Instead, Schwieters tries to keep his focus on what people can be doing based on the information known now.

“During my 20 years of practice, I’ve learned that an important part of helping a patient with a difficult diagnosis is offering a plan to them and their families that includes accurate information, reasonable options, sincere empathy and plans to be with them through the evaluation and treatment,” he said.

Schwieters’ live posts have drawn audience members from as far away as Australia, an impact he said would not be possible without the reach social media provides. 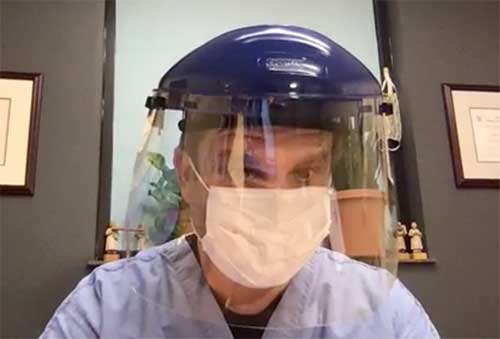 “I’m not using it by choice,” he said. “I’m using it because it’s the language being spoken out there. It’s where the audience is.

“Until all this, I didn’t use social media much at all because I was aware of the fear and hyper-stimulation it can play a part in creating. But when I saw what was happening in Europe, and what was starting to happen here, I realized it also had a role to play in getting a message out there that could be helpful to people as well.”

Schwieters said his presentation is still a work-in-progress.

“I’m learning as I go and I try to make that very evident,” he said. “The environment is changing all the time because this virus is so new and things are still very unpredictable.

“I’m also not overly polished, but people have told me that’s actually kind of endearing. I’m just a normal guy who thought this might be a way to help people at a very stressful time.

“My mission has been to provide accurate information in a calm and non-biased way that would promote a curious mind to be able to think about frequently changing information without fear or panic,” he continued. “By using basic strategies of mindfulness – gratefulness, kindness and understanding – people can adapt and make better decisions for themselves and their family.”

Schwieters said he has received plenty of support from the SJU and CSB community. That includes his friend (and ex-roommate) George Maurer ’88, the internationally acclaimed musician and composer.

“On my first talk, I played ‘Don’t Stand So Close to Me’ by The Police,” Schwieters said. “Facebook didn’t like that. So I asked George if I could play his music and now that’s how I start each chat.”

Schwieters said he doesn’t know how long he will continue doing his updates. But, for now, they seem to be finding a growing audience, so he plans to keep going.

“It’s like (legendary former SJU football coach) John Gagliardi always said, ‘If something is working, keep doing it,’” he said. “I feel like this is making a positive impact and that’s important right now.”