Award-winning author to read from his latest book on hoaxes 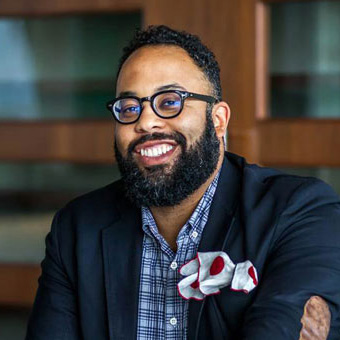 Kevin Young is coming to the College of Saint Benedict and Saint John’s University to conduct a public reading and conversation.

No, this isn’t fake news.

But Young will be talking about fake news and other topics involving hoaxes and deception when he delivers a public reading at 7 p.m. Wednesday, March 21, at room 204, Gorecki Center, CSB.

His appearance, which is sponsored by the Literary Arts Institute, is free and open to the public.

Young is the author of the award-winning book “Bunk: The Rise of Hoaxes, Humbug, Plagiarists, Phonies, Post-Facts, and Fake News” (Graywolf Press, 2017). “Bunk” traces the history of the hoax as a peculiarly American phenomenon – the legacy of P.T. Barnum’s “humbug” culminating with the currency of President Donald Trump’s “fake news.”

Young finds that fakery is woven from stereotype and suspicion, with race being the most insidious American hoax of all.

The book is “deep in its research, profound in its insights and lyrical in its prose,” wrote Megan Garber in The Atlantic. “The book is even more compelling as an argument: that hoaxes, so tangled with stereotype and systemic lies, are inextricable from race, a fake thing pretending to be real.”

Young told Publisher’s Weekly that he considers “Bunk,” which has garnered a number of awards and nominations, to be a follow-up to 2012’s “The Grey Album: On the Blackness of Blackness.”

“For ‘The Grey Album,’ I’d been thinking about the good side of lying – lying as kind of improvisatory act in black culture,” Young told Publisher’s Weekly. “Afterward, it nagged at me because there are those other kinds of lies that I think are all around us, and I was fascinated about hoaxes in general. So ‘Bunk’ became a natural extension of ‘The Grey Album.’ ”

“The Grey Album: On the Blackness of Blackness” won the PEN Open Book Award, was a New York Times Notable Book, and was a finalist for the 2013 National Book Critics Circle Award for criticism.

“Bunk” has scored just as well with the critics. It is a finalist for the National Book Critics Circle Award (to be presented March 15 in New York City), and was a finalist for the 2018 PEN/Jean Stein Award. It has been named one of the “Best Books of 2017” by National Public Radio, The Atlantic, the Los Angeles Times, the Dallas Morning News and the Atlanta Journal-Constitution.

In 2016, Young was inducted into the American Academy of Arts & Sciences and assumed the directorship of the Schomburg Center for Research in Black Culture in New York City. A noted poet who is an author of 12 books of poetry and prose, Young was named poetry editor at The New Yorker in March 2017.

Young will be in residence March 20-22 at CSB and SJU, working with students and visiting various classes.