Elaine Rutherford and Scott Murphy have between them about 40 years of experience as art faculty members at the College of Saint Benedict and Saint John’s University. Last spring, they both got the opportunity to take sabbaticals to work on independent projects. Beginning Dec. 12 and running through Feb. 25 at the Benedicta Arts Center on the CSB campus, some of their efforts will be on display as part of a mixed media exhibition titled “Just Wondering …”

That flowed from the fact that there often were thousands of miles between them, with Rutherford working back in her native Scotland and Murphy remaining at his home studio in St. Joseph. The title reflects the communication between them while they were away from campus, and one of the best examples is a series of hand-crafted postcards they sent as an expression of what they were doing and to prompt something in return.

“Scott and I both like hand-made stuff,” said Rutherford, who came to CSB and SJU in 1998 and teaches painting, drawing and book arts. “We’re both very analog people in a world that is not. When we realized we were going to be on sabbatical at the same time, we decided to collaborate on an exhibit and we sent pieces to each other weekly, through the mail, as a way of staying in touch.”

Murphy, who is originally from New Jersey, came to Saint Ben’s and Saint John’s in 2008 and specializes in experimental photography and book arts. He also started an instruction program in papermaking.

“We would respond to the ones we were getting in whatever order they were arriving,” Murphy said. “So, there was a back-and-forth communication, but it was very slow. Since everything else in the world is so fast it was kind of nice to have something show up and you had time to respond.”

Murphy, who has a master’s in anthropology and a master of fine arts in photography and book arts – both from Arizona State, created collages with text and imagery. The art had to involve something in his studio at the time. Rutherford, who has a master’s in fine art from New Mexico State in drawing and painting, specializes in landscape, images of the sea and cloud formations She would respond with her own small paintings and drawings.

“One of the ways that Scott works that resonates with me is he’s good at finding the longest and most laborious way to make something,” joked Rutherford, who also served as virtual artist in residence with the Center for Theological Inquiry in Princeton, New Jersey, during her sabbatical. “A lot of the images I have are of the sea, and I’d be working on those but then I’d get a little cloud in the mail from Scott. Or maybe I was drawing some clouds with graphite and then I would find one in the mail from him. The cards turned into these weird little premonitions.”

One of Murphy’s responses, for example, reads “I’ll see your dark postcard and raise you a cloud.” He used a West German-made typewriter from the 1950s to produce some of the text for his creations. Others had a ransom-note effect. For the exhibition, he also produced a book on love with collaboration by poets, a set of cards with clouds on one side and quotes on the other, and another 16 cards with characters removed from the words printed on them to give the implication of an expletive. That collection is called “Give a Bleep.”

“The idea is that you can give someone a bleep, literally,” said Murphy, who will donate profits from sales of reproductions to charity.

The exhibition will total more than 60 pieces in all. Rutherford’s contributions include a series of small drawings of the sea and a larger series of clouds and landscape juxtapositions.

The exchanged postcards might be among the most thought-provoking items, however. They feature short notes and summaries as well as postage and handling marks, which Murphy calls “the postal patina.”

“It was important to us that they bore the evidence of where they had been,” Rutherford said. “One of the things I like when I look back now is that I can see the ebb and flow of what was going on for us in certain moments in time … It’s a lot different than texting. There’s something that happens emotionally and cognitively with the motion of making a mark with your hand.”

“Thinking about experience in the world, it’s so frenetic,” Murphy added. “People are always trying to respond in the moment. That’s new, a recent phenomenon. So much of existence has been a much slower experience and being able to think through things before you send out your message to the world. For example, people used to write letters. We don’t really do that much anymore.” 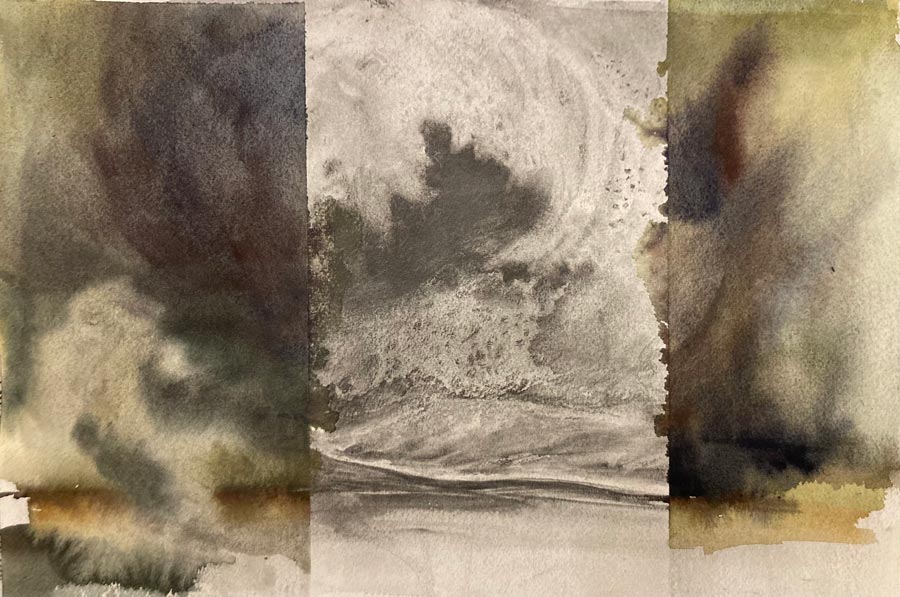 This is an example of watercolor painting Elaine Rutherford produced during her sabbatical from CSB and SJU last spring. 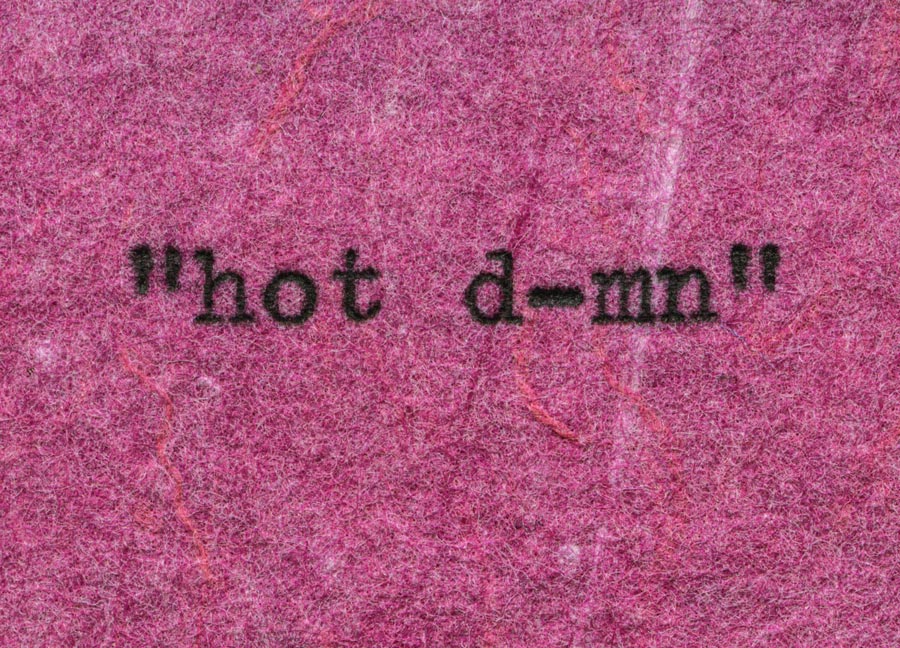 This is an example of a card Scott Murphy produced during his sabbatical. It is on handmade paper and the typewriting is from a 1950s-era West German typewriter. 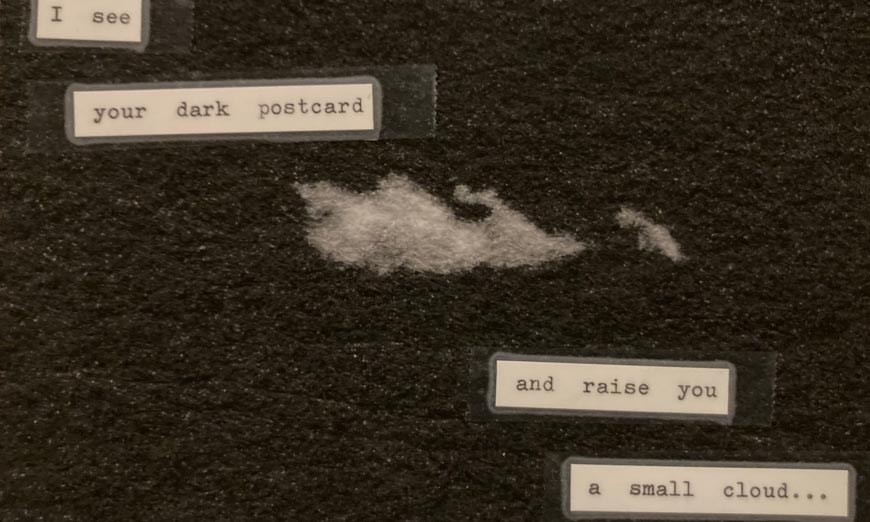 This is an example of a postcard Scott Murphy created and sent to Elaine Rutherford. Their correspondence to each other and other art they produced on sabbatical will be on display as part of "Just Wondering ..." It will show from Dec. 12-Feb. 25 at the Benedicta Arts Center on the College of Saint Benedict campus. 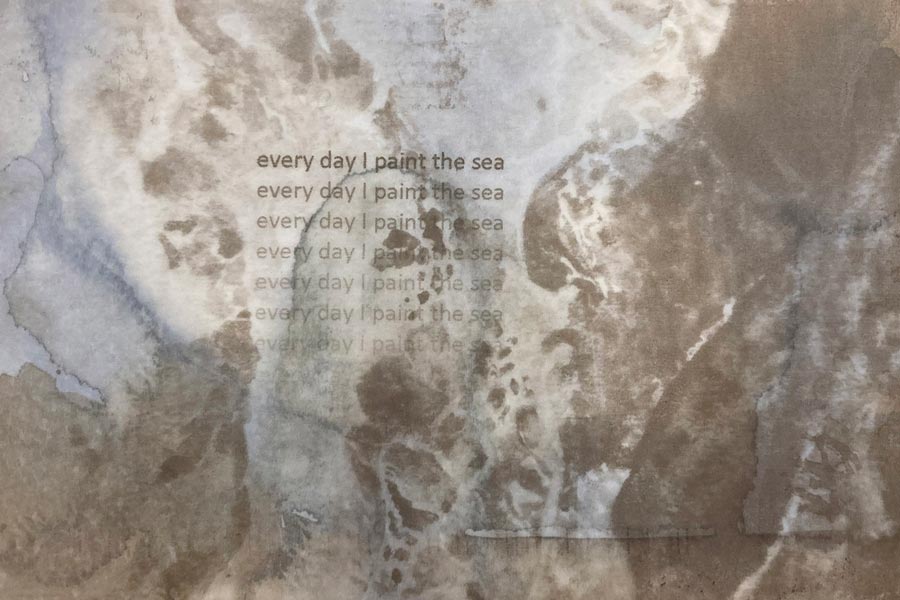 This is an example of a postcard Elaine Rutherford created and sent to Scott Murphy.