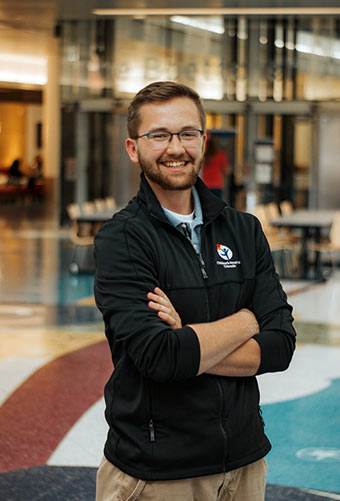 John Colleran doesn’t feel he earned the title of ‘survivor.’

But he’s dedicated to making sure the word can be applied to his future patients.

The Saint John’s University senior from Excelsior, Minnesota, was diagnosed with stage three Hodgkin lymphoma when he was 12 years old. After six rounds of chemotherapy and multiple rounds of radiation, Colleran walked away with only a few scars to show.

Now, as a summer intern in the musculoskeletal research center at the Children’s Hospital of Colorado, located on the Anschutz Medical Campus in Aurora, Colorado, Colleran is giving back to the pediatric world. His internship runs until Aug. 16.

“Pediatric medicine brings together a group of individuals who genuinely care for their patients,” he said. “These aren’t people simply doing a job; they are investing themselves into what they do. They make it personal.”

For Colleran, ‘personal’ is the epitome of his relationship with medicine. Stage three Hodgkin lymphoma has also affected his sister, who’s currently continuing her treatment.

It’s not just his family’s experience with cancer that pushed him into the field, though. Even while facing his own battle against cancer, Colleran was focused on the patients around him.

“Looking back on my chemotherapy treatment… one thing still strikes me; the other patients present in my wing of the hospital,” he said. “There were so many other patients around me who either didn’t make it or will carry true side effects with them for the rest of their lives.”

From the very beginning, it was clear Colleran was meant to pursue medicine.

Though his position at Children’s doesn’t involve much direct patient care, his experience with cancer still translates to the job. A large portion of the internship involves calling patients and their families to discuss the experience they had during their treatment at the hospital.

While only a small percentage of these patients are battling cancer, his experience provides the same benefits.

“Therefore, when a patient seems confused over the phone, I make sure to take the time to explain myself thoroughly. If anything, it’s that understanding that cancer has given me.”

In addition to patient calls, Colleran has also had the opportunity to gain mentorship from professionals, attend educational lectures, shadow multiple different specialties of medicine and even stand-in on multiple surgeries.

He’s most excited, however, about the scientific research manuscript he’s working on. Though it’s hard to say which scientific journal the manuscript will appear in and when, Colleran is pursuing primary authorship of the script.

If you’re not a member of the scientific world, that’s a big deal.

And again, Colleran’s experience with cancer aids him.

“When it comes to research, it helps to have a person writing an article about a disease state or condition that they intimately understand,” he said. “It makes for more genuine writing that can seriously hit at the topic of interest.”

As an integrative science major on the pre-medicine track at SJU, the opportunities Colleran has received through this internship are putting him one step closer to his end goal of a career in medicine.

None of which would have been possible without the College of Saint Benedict and SJU, whose community brought the internship to Colleran’s attention.

“It was a combination of CSB/SJU’s amazing network of alums, as well as the small classroom sizes and intimate connections made between students and professors,” Colleran explained. “I am a strong advocate for the utility of small classroom sizes, as I believe it helps students looking to make the most of their education do just that.”

He encourages prospective and current students to “take advantage of the family system.”

“We live in a small world and the more you put yourself out there, regardless of what it is, you have the possibility of finding connections around every corner,” Colleran explained. “I cannot tell you how many times I have made a connection in my field through entirely unrelated involvements.”

The community network on campus wasn’t the only thing that aided Colleran on the path to his internship, however. The application process was competitive, with seven interns chosen out of over 150 applicants.

“My résumé has never been the most elaborate, so my advisers, professors, and fellow classmates (at CSB/SJU) all helped in lending a critical eye to my materials leading up to my application’s submission,” Colleran said.

“Without the personal connections that I have made with my professors, my academic achievements alone may have not been enough to gain me this position here.”

Though his internship is coming to an end, Colleran isn’t about to slow down. Currently, he’s hoping to apply for the Benedictine Volunteer Corps in 2020-21 as well as a Fulbright award in a Spanish speaking country.

Colleran currently leads mission trips to Central America over spring break and would love to grow in his Spanish skills through these opportunities.

Though he said “travel and language proficiency are most definitely my priority over research at this moment,” he plans to return to research from 2021-23 after a year abroad.

He hopes to matriculate into medical school by 2023 after taking the MCAT.

There are big things on the horizon for Colleran, but he doesn’t forget to thank CSB/SJU for the support they’ve provided him along the way.

“I feel like my education at CSB/SJU, thus far, has prepared me very well to think bigger and ask the tough questions,” he said. “I am incredibly thankful to have so much support and belief in my abilities from my professors, advisors, and mentors.”