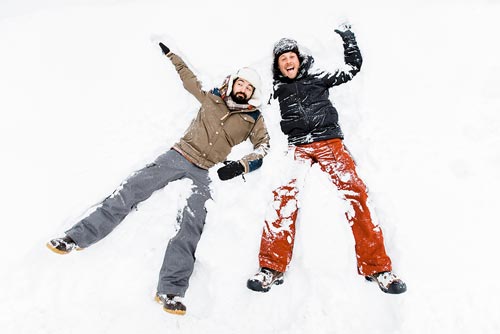 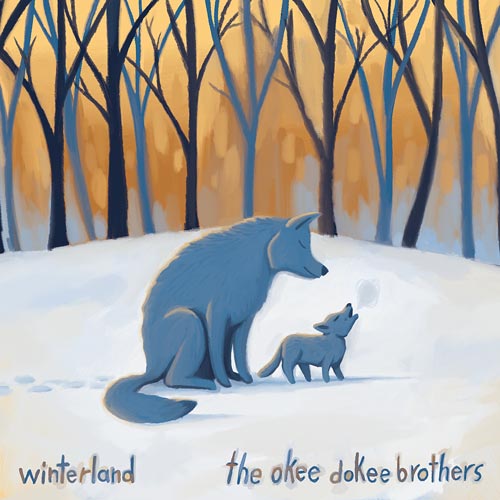 It’s unlikely that many Grammy Award nominees hold neighborhood sing-alongs next to a meandering creek.

After all, could you really see Beyoncé or Taylor Swift leading their neighbors in folk songs around a campfire?

But Joe Mailander ’08 occasionally does that whenever he has some free time at his home in Minneapolis. And, in a sense, that continues the Benedictine values of community, hospitality and sharing that were instilled in him at Saint John’s University and the College of Saint Benedict.

Mailander and musical partner Justin Lansing are better known as the Okee Dokee Brothers, and they’ve been nominated for a Grammy for the fourth time in the Best Children’s Album category for their latest CD, “Winterland.” They won the Grammy with their album “Can You Canoe?” in 2012, and were also nominated in 2014 (“Through the Woods”) and 2016 (“Saddle Up”).

The glitz and glamour of the Grammy Awards show Jan. 26 in Los Angeles will be in stark contrast to Mailander’s gatherings along Minnehaha Creek.

“It’s nothing political, it’s nothing divisive, it’s just about getting to know your neighbor, and they bring picnics and we all sing old folk songs,” said Mailander of the informal gatherings. “It seems to be a really healing event for people to gather and find something to get along on. We want to inspire communities to do that type of thing.”

Some of that feeling comes from his days at SJU and CSB. How did the schools prepare him?

“I think first and foremost, being part of a community that acknowledges the common good and that our talents aren’t just for ourselves, but for sharing and for bringing people together,” said Mailander,  adding that the biggest thing he took away was caring about service, keeping an eye out for other people and making sure that everybody is invited.

“I think that social justice message came through some of my classes, that music could be something that can change people in a way that makes our communities more just and more loving,” he added.

Mailander recalled the time he did a project in S. Mara Faulkner’s English class on folk singer Woody Guthrie and the Dust Bowl of the 1930s. He did the entire presentation as Guthrie, who stood up for workers’ rights and the marginalized throughout his career.

“That has always stuck with me as the reason why folk music is so powerful,” Mailander said. “Woody Guthrie and Pete Seeger made kids’ albums, too. They knew that a really great way to have an impact on people is when kids and families are young. They are at a point where you can affect how compassionate they can be in this world, and how they act toward others.

“If there’s one thing Saint John’s taught me, is that our work is important and it should be for the service of the common good,” Mailander said.

Another influence from his college days was Axel Theimer, professor of music at CSB and SJU.

“Axel has always been an influence on me because of his way of showing up and doing the work and being disciplined,” said Mailander, who was part of the SJU Men’s Chorus and CSB/SJU Chamber Choir. “Every single day, I went in there and tried my best, tried my hardest and learned something about how people sing together in harmony and different parts, and training your ear to sing on pitch.

“I was definitely not the top of the singers; I was more of the folkie that was trying to learn all this classical stuff,” he continued. “To this day, though, the skills I learned – how to sing, being on key, finding that harmony and listening to the people next to you – those have all come back to be very important skills for me as I record records and sing at concerts today.”

Listen to any of the four Okee Dokee Brothers albums and you’ll hear those harmonies in play between Mailander and Lansing.

“Justin and I have been singing together for over 20 years, and now we’re finally getting to the point where our voices are meshing better,” he said.

Both Mailander and Lansing grew up as neighbors in Denver. Following high school and throughout college, they served as summer camp counselors.

“We played a ton of folk songs around the campfire for kids, and we just noticed that we felt more authentic singing in that realm of things than late night in a bar,” Mailander said. “We did a lot of bar gigs in college and after college. Honestly, the energy just wasn’t that communal or participatory.

“We really wanted to affect people’s lives in a way that made them more engaged, empowered to be part of the experience, not kind of a passive experience. The more participatory the better,” he said. “The sound of the gigs we liked tended to be more family events and family nights in parks, concerts, school or church shows.

“As we went in that direction, it just seemed that our writing was getting more appropriate for families, rather than writing about drinking and jumping on trains and all that stuff. This was just more us. It was the perfect little niche for us and our music,” Mailander said.

A 2007 grant given by SJU President Emeritus Dietrich Reinhart, OSB, further pushed Mailander and Lansing toward the children’s genre.

“We started a nonprofit program called the Medicinal Strings. We were funded by the grant and donations to do these folk shows for low income communities, low-income daycare centers and family nights,” Mailander said.  “That was really kind of (Reinhart). It did help us continue what we were doing, which was community music making.”

The Grammy race in their category is interesting. It includes Daniel Tashian, who co-produced Kasey Musgraves’ Grammy-winning album “Golden Hour” last year, and Caspar Babypants, who some people might recognize as Chris Ballew, the former lead singer and bass guitarist of the alternative rock group The Presidents of the United States of America.

“It seems like everybody’s got their own little chance of winning. They’re very different albums. That’s what happens in the children’s music category – a lot of different genres are put together,” Mailander said.

“Our music, we like to say, is family music. We try to write songs for the grandparents, the parents and the teenagers so that everybody can kind of sing together and enjoy the music as a family unit,” he added.

Just like those evening sing-alongs by the Minnehaha Creek.