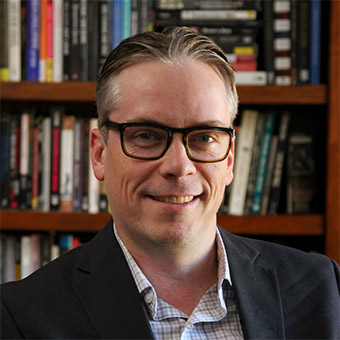 David M. Krueger, author of the book “Myths of the Rune Stone: Viking Martyrs and the Birthplace of America,” will present the lecture “Viking Myths of Minnesota’s Kensington Rune Stone: What Those Myths Reveal About the (Mis)Shaping of Identity in the Face of the Religious and Racial Other” at 4:30 p.m. Thursday, Oct. 4, in the Centenary Room (room 264), Quadrangle Building, Saint John’s University.

The lecture, sponsored by the Jay Phillips Center for Interfaith Learning, is free and open to the public.

In 1898 a Swedish immigrant farmer claimed to have discovered a large rock with writing carved into its surface in a field near Kensington, Minnesota. The inscription told a North American origin story, predating Christopher Columbus’s exploration, in which Viking missionaries reached what is now Minnesota in 1362, where they were killed by Native Americans.

The tale’s credibility was quickly challenged and eventually undermined by experts, but the myth took hold. Faith in the authenticity of the Kensington Rune Stone became part of the local Nordic identity. Accepted and proclaimed as truth, the story of the Rune Stone recast Native Americans as “pagans” and “savages” who deserved to be removed to make way for a white, Christian society.

In this lecture, Krueger will discuss what Minnesota’s Viking myths reveal about anxieties related to religious and racial diversity that persist to the present day.

“The religious landscape of Minnesota is more diverse than ever. Christians still dominate the culture of the state, but there are now Muslims, Buddhists, Hindus and a growing segment of the population that identifies as nonreligious,” Krueger said.

“In light of the history of the Kensington Rune Stone in the 20th century, it is appropriate to inquire whether the specter of the ‘savage’ will be revived to confront the anxieties aroused by the presence of a new religious and cultural ‘other.’ ”

Krueger, who grew up on a Minnesota farm near where the Rune Stone was unearthed, is a scholar, storyteller, author and educator who is passionate about public history and social justice. He earned a master’s degree from Princeton Theological Seminary and a doctorate in religion from Temple University. His areas of expertise include American religious history, myths and popular culture.

Krueger works as a media and education consultant for The Inside-Out Prison Exchange Program and provides scholarly direction for a U.S. State Department program on religious pluralism run by the Dialogue Institute at Temple University. His articles and essays have appeared in several media outlets including the Religion Dispatches and Marginalia: A Los Angeles Review of Books Channel.