It was hard to tell who was more excited about the first in-person meeting of two new graduate nursing cohorts at the College of Saint Benedict on Sept. 22.

Was it the professors, or the doctoral candidates themselves?

With a bevy of hugs, handshakes and fist bumps, doctoral candidates made their way into the Guy and Barbara Schoenecker Nursing Education Suite in the Main Building, CSB, and went through orientation in regard to the nursing faculty, the campus and its facilities and some of the online and support resources available to students to two different tracks.

“The first doctoral program at the College of Saint Benedict, in partnership with Saint John’s University, is a really exciting time for us, not only (for) the Nursing Department but also for the College,” said Assistant Professor of Nursing Dr. Jennifer Peterson (CSB ’98), DNP, APRN, FNP-C, CNOR, who is chair of the new graduate nursing program.

“The nursing program at the College of Saint Benedict has been in place since 1973, and we’ve been very proud of the high-quality graduates that we’ve had for our undergraduate programs, and we’re very excited to be offering a graduate-level program,” Peterson added.

Brooklyn Loxtercamp echoed that feeling. She was one of 12 doctoral candidates in the classroom during orientation, while two attended online.

“It feels like home,” Loxtercamp said. “I graduated (from CSB) in 2020, kind of right in the middle of everything (the COVID-19 pandemic). It was a very dramatic end to our stories. I’m really happy to be back and start this program off, see where it goes from here, get a good foundation and get ready.

“Honestly, the professors here are wonderful. I could have went and looked elsewhere, but I really only looked here for my graduate degree because I’m really excited to work with these (professors) again. The care they show and the way they teach really drew me here,” said Loxtercamp, who just passed the year mark working in the oncology unit at Mercy Hospital in Coon Rapids, Minnesota.

“I do feel proud to be part of this group. I hope I can live up to that expectation,” added Denise Christie, a 2000 CSB graduate who is a nurse anesthetist at St. Cloud (Minnesota) Hospital and a Sartell (Minnesota) High School graduate.

For Christie, the Schoenecker Nursing Education Suite was also new and exciting.

“I’m trying to take in this whole Nursing Department right now, because it looks vastly different than it did. It’s incredible,” Christie said.

But Christie’s comment also speaks to the quality of the nursing program at CSB and SJU, as well as the history of the Sisters of the Order of Saint Benedict in St. Joseph, Minnesota. In 1882, Dr. A.C. Lamothe Ramsay asked the Sisters to consider establishing a hospital in the growing city of St. Cloud. That hospital eventually evolved into the modern-day St. Cloud Hospital, a sprawling campus along the Mississippi River.

“The Benedictine Sisters were part of that tradition at the St. Cloud Hospital. They were the foundation of how we started our undergraduate program here at the College (in 1973),” Peterson said. “Now, we get to offer the first doctoral-level program at the College of Saint Benedict and expanding on that tradition.”

Meanwhile, the undergraduate program at CSB and SJU continues to flourish. College Factual recently named the program the second-best in Minnesota, trailing only the Mayo Clinic School of Medicine in Rochester, Minnesota. In 2020, the yearly undergraduate nursing cohort was expanded to 72 students.

The undergraduate program has also created a huge benefit for the doctoral candidates – a guaranteed clinical placement during the program.

“Because of our high-quality undergraduate program, and the partnerships and relationships we’ve built in the community, we’ve been able to secure clinical placements for our students to take that pressure off our (graduate) students having to find them,” Peterson said.

“Many programs require students to find their own clinical placements through networking or already known connections, and that can be a stressful challenge for students,” Peterson said. “That’s something that our students won’t have to worry about.”

There are other benefits as well, according to Karina Barabash, who works in the rehabilitation unit at Regions Hospital in St. Paul, Minnesota, and who graduated from CSB in 2016. She noted the ability to communicate with professors, the small class size and the flexibility of the schedule. Classes are a mixture of online and in-person classes – in fact, their first online class session was conducted Monday, Sept. 20.

“For a while, I did not think I was going back to (graduate) school. I’m a mom, and that’s all I can do right now. But when Saint Ben’s announced that they were starting this graduate program, it immediately caught my attention and I said, ‘That’s where I want to go.’ I just felt like I want to go back home,” said Barabash, a St. Paul Harding High School graduate.

“I think one of the other benefits that we have is that strong sense of community that we already have at the College,” Peterson said. “We plan to bring that sense of community to our graduate programs by having a smaller cohort and allowing the students to have the opportunity to really get to know the faculty so they feel supported along the way through the graduate program.”

Other program highlights include:

It all came back to an exciting, historic day, however.

During the faculty introductions, Carie Braun, professor of nursing at CSB and SJU, joked that she has taught for 25 years in the undergraduate program – and two days in the graduate program. 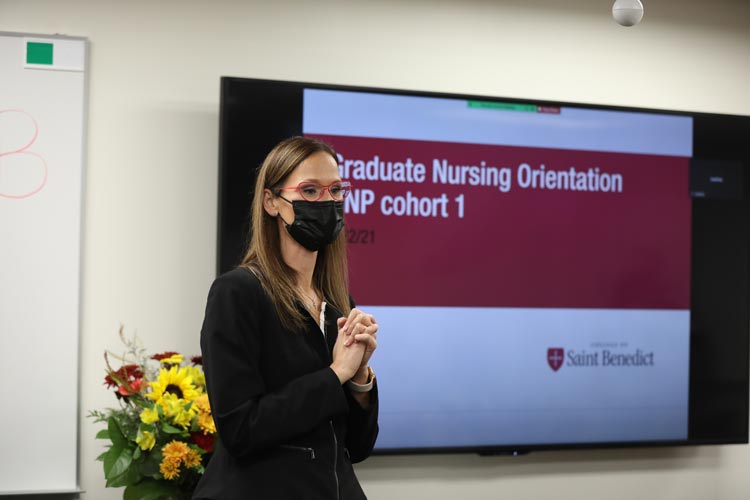 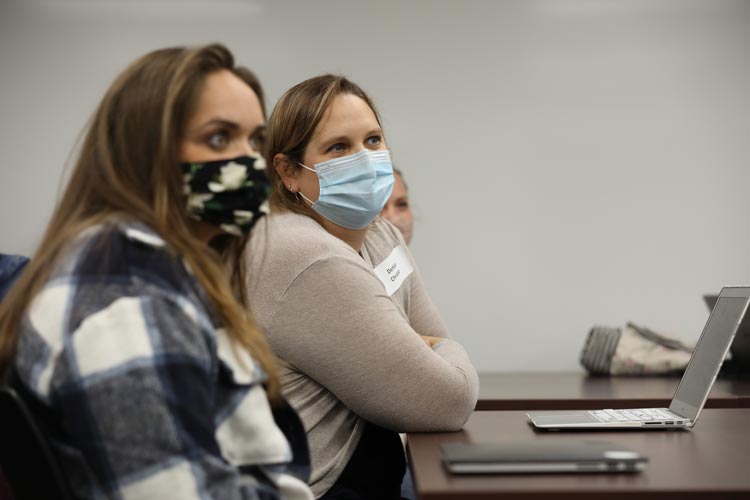 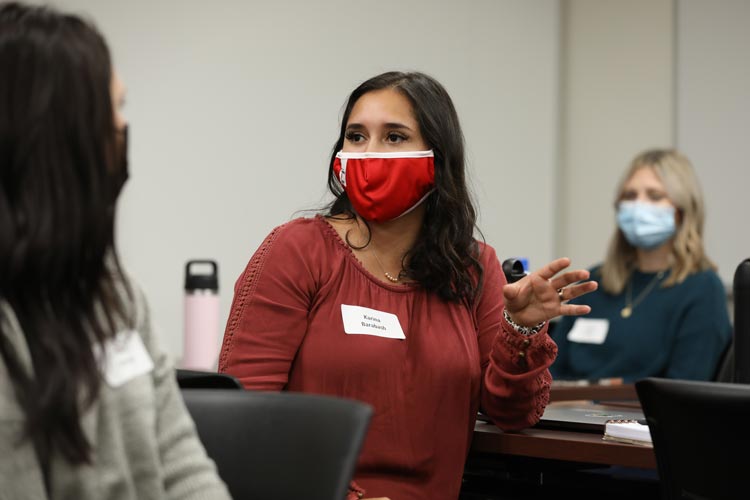 See the story where the program was announced.

See the video of the historic first night of the graduate nursing programs.