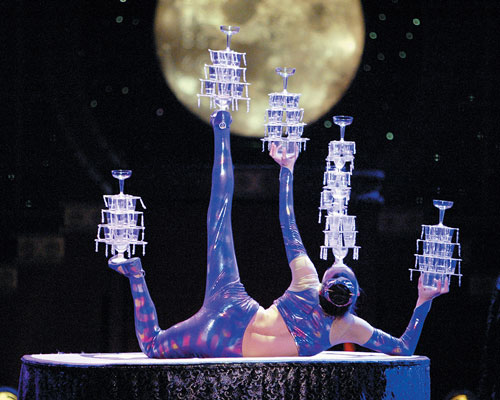 The Golden Dragon Acrobats will literally bend over backwards to entertain you.

Defying gravity and stretching beyond average human limits, the group will put on a show you won’t want to miss at 7:30 p.m. Saturday, Feb. 22, at the College of Saint Benedict’s Escher Auditorium in the Benedicta Arts Center.

The group is also conducting a shorter one-hour matinee show at 10:30 a.m. Feb. 22 at Escher Auditorium, which will include performances from the evening show. Both are part of the 2019-20 Fine Arts Series at CSB and Saint John’s University.

Children of all ages will be amazed at the feats the group performs at both shows. The Golden Dragon Acrobats feature contortionists, tumblers and jugglers in acts such as plate-spinning, a bicycle pagoda and juggling everything from balls to umbrellas using not only hands but feet.

Golden Dragon Acrobats represent the best of a time-honored tradition that began more than 25 centuries ago. They hail from Cangzhou, Hebei province, in the People’s Republic of China. They have toured the United States continuously since 1978, and its 25 members are athletes, actors and artists who have studied and trained for their craft since early childhood.

Danny Chang is the group’s founder, producer and artistic director, and is one of the world’s leading promoters of Chinese acrobatics. He began his training at the age of 8 with his family’s acrobatic school in Taipei and joined its touring wing at the age of 10.

He is the recipient of many awards, including the prestigious Medal for International Faith and Goodwill by the Republic of China’s Coordination Council for North American Affairs.

You won’t believe your eyes as this group catches bowls on their heads, fly through the air and balance on a wide variety of mediums. The acrobats will be seen perching atop a 30-foot tower of chairs, bending like rubber and balancing human pyramids while riding moving bicycles.

In 2005, their Broadway debut and seven-week run at the New Victory Theater earned two prestigious New York Drama Desk nominations (for Best Choreography and Most Unique Theatrical Experience). The group returned to the Broadway venue in 2014, making them the only acrobatic troupe from China chosen twice to perform at this prestigious venue.

Golden Dragon Acrobats also are a seven-time Entertainer of the Year award winner from the National Association of Campus Activities.

The Marquee said it’s “a show the entire family will remember for a lifetime.” The Washington Post said. “There is a precision and beauty about everything these performers do.”

With all the praise for the Golden Dragon Acrobats, it all comes down to a single thing: They make the impossible look effortless.

Tickets for Golden Dragon Acrobats’ evening performance are $36 for adults, $33 for seniors, $29 for faculty and staff, $15 for youth and $10 for CSB/SJU students.

Tickets for its matinee performance are $26 for adults, $23 for seniors, $19 for CSB/SJU faculty and staff, $15 for youth and students (with ID) and $10 for CSB/SJU students.