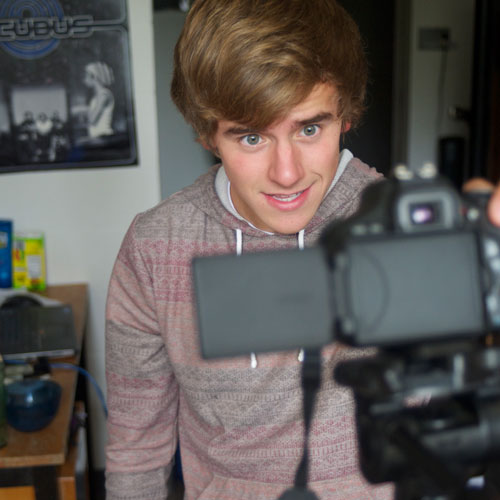 Connor Franta is seen here in a 2013 photo taken for the CSB/SJU Magazine.

Franta, who attended SJU from 2011-13, was one of five nominees for the award, which is decided by online voting.

"You guys voted your sweet little hearts away and I cannot thank you enough for that," Franta tweeted after the award was announced. "You're a special bunch and I'm so lucky to have you.

"This is actually unreal. I've never won anything like this before," he said in another tweet. Known for his humorous opinionated videos, his smirk-like grin and self-deprecating humor, his goal has always been to make people smile, he told writer Adam Tucker in a 2013 story in the College of Saint Benedict/Saint John's University Magazine.

Franta was born in Wisconsin, but moved to La Crescent, Minnesota, at an early age. He started making YouTube videos in 2010, and when he came to SJU, produced some of his videos from his dorm room.

He competed on both the cross country and swimming teams while attending SJU, and was majoring in global business leadership.

He has 5.2 million subscribers to his channel, Connor Franta. His videos have been viewed 303.9 million times.

Besides his work on YouTube, he is the author of a 2015 book, "A Work in Progress," which talks about his life. The book spent 16 weeks on the New York Times Best Seller list.

He also sells coffee and a limited edition line of clothing. Franta has also released three compilation albums of his favorite music from up-and-coming artists.