COLLEGEVILLE, Minn. (01/23/2006) - Saint John’s University announces the establishment of The Eugene J. McCarthy Lecture to honor one of its most distinguished graduates.

Of His Own Kind: A Tribute to Eugene McCarthy '35 by Albert Eisele, SJU '58

“Gene Leaves Us All Behind” by Vance Opperman, Minnesota Law & Politics Magazine

Remarks by Minister at McCarthy's Burial

"A politician risked his political life because the cause was just" by Keith C. Burris, Journal Inquire, Manchester, Conn.

"The monks, McCarthy and quiet courage" by Eric Schubert 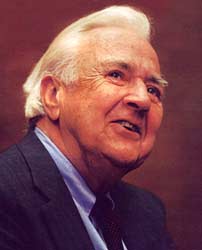 We at Saint John’s Abbey and University are saddened at the passing of a dear friend and illustrious alumnus, Senator Eugene J. McCarthy, and we celebrate his brilliant life of service to others.

Gene came to Saint John’s as a high school freshman more than 75 years ago and distinguished himself as an excellent student and athlete at the Preparatory School and the University. In 1942, he became a novice at Saint John’s Abbey and remained a member of the monastic community for nearly a year.  Commenting on Gene’s decision to leave the monastery, Fr. Colman Barry, OSB, said “it was like losing a 20-game winner.”

Today we join others in paying tribute to a brilliant career in which Gene skillfully blended philosophy, poetry, politics and humor. It was a career ever distinguished by high ethical standards and a commitment to Benedictine values.

We remain grateful for the many times he came home for a visit. In the midst of his 1968 campaign for the presidency he surprised the political pros when he brought his campaign staff to Saint John’s for a four-day retreat. His last visit was three years ago when, frail in body but certainly not in mind, spirit or wit, he came to join the monastic community for an evening meal. Ours was a long, close relationship and we will miss him.

To honor and remember one of Saint John’s favorite son’s many contributions to his country, Saint John’s will have a memorial service for him in the Abbey and University Church at a time to be announced. In addition, the University has established the Eugene J. McCarthy Legacy Fund to perpetuate his extraordinary contributions to political, intellectual and spiritual life.

The Saint John’s University community is mourning the loss of one of its most accomplished and highly esteemed alumni, Senator Eugene McCarthy. A prolific writer, illustrious statesman and extraordinary scholar, Gene embodied the values of Benedictine teachings on social justice, personal integrity and family life. He was a man whose college education and religious formation prepared him to lead others by manifesting a Christian conscience in his writing, speaking and actions. In his life, Eugene McCarthy achieved what many of us only dream about - he left the world a better place for all of us.

"A Sense of Place – SAINT JOHN’S OF COLLEGEVILLE" by Eugene McCarthy, 1987

"A Copenhagen Snuff Can Filled With Dirt" by Eugene J. McCarthy, March 1978

McCarthy was born in Watkins, Minn. on March 29, 1916.  McCarthy graduated from Saint John’s Preparatory School in 1932, Saint John's University in 1935 and the University of Minnesota in 1939.

McCarthy was a member of the SJU baseball and hockey teams during his years in Collegeville.  McCarthy was the leading scorer on the 1934-35 SJU hockey team that won the first Minnesota Intercollegiate Athletic Conference championship in school history.

He taught in the public high schools of Minnesota and North Dakota from 1935-1940 and as professor of economics and education at SJU from 1940-43.

Then, in 1943, McCarthy enlisted in the army and became an intelligence officer throughout World War II.  McCarthy was a civilian technical assistant in the Military Intelligence Division of the War Department in 1944 and an instructor in sociology and economics at St. Thomas College, St. Paul, Minn., from 1946-49.

McCarthy gained a reputation as an intellectual in politics. In 1967, he announced his candidacy for the 1968 Democratic presidential nomination as a direct challenge to President Lyndon B. Johnson's Vietnam policies.  His antiwar position won the support of many liberals and his strong showing in the March 1968 New Hampshire primary brought Sen. Robert F. Kennedy into the race and helped persuade Johnson not to seek reelection.  McCarthy was defeated for the nomination by Hubert H. Humphrey.

McCarthy was the recipient of the 1964 Pax Christi Award, the highest award bestowed by Saint John's Abbey and University. The Pax Christi Award honors individuals who have distinguished themselves through a life's work that reflects the ideals of Benedictine monasticism.  McCarthy was a 1983 recipient of the Saint John’s University Alumni Achievement Award and the President’s Medal.

THE MAPLE TREE
The maple tree that night
without a wind or rain
let go its leaves
because its time had come.
Brown veined, spotted,
like old hands, fluttering in blessing,
they fell upon my head
and shoulders, and then
down to the quiet at my feet.
I stood, and stood
until the tree was bare
and have told no one
but you that I was there.
--Eugene McCarthy, 1916-2005

This poem is from Mike Hazard's film about Eugene McCarthy, "I’m Sorry I was Right."

I'm Sorry I Was Right: Eugene McCarthy -- A biographical documentary by Mike Hazard on the life of Eugene McCarthy, Congressman and Senator from Minnesota who challenged Lyndon Johnson for the Presidency in 1968 in opposiiton to the war in Vietnam. | A Short History of Eugene McCarthy

"Notes on a Napkin, Lunch with Gene" by Sam Smith, Progressive Review