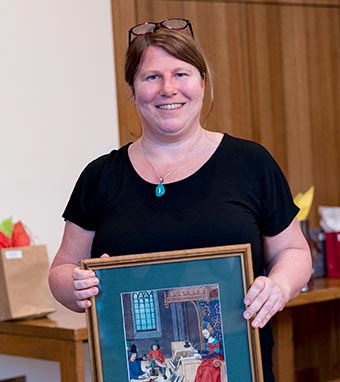 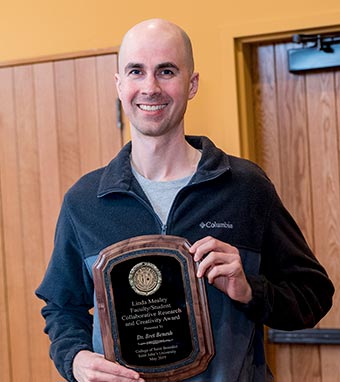 Faculty and staff members from the College of Saint Benedict and Saint John's University were honored at the Academic Affairs Awards and Recognition Ceremony May 6 at the Founders Room, SJU.

The S. Linda Kulzer Gender Educator Award was awarded to Shannon Smith, assistant professor of history at CSB and SJU.

The Academic Affairs Awards Ceremony also recognized faculty for years of service, promotions and contributions as department chairs and leaders.

Grell, a noted biologist who was a 1933 graduate of CSB, served students at CSB and SJU for more than 35 years with intelligence, dedication and affection. Her lifetime of teaching at CSB is celebrated through the recognition of a faculty member who represents the best teaching and learning at CSB and SJU. Grell served as president of CSB from 1963-68. This award has been presented yearly since 1995.

Esch, who has taught at CSB and SJU since 2006, is an expert on developing assessable and appropriate learning goals. She spent the last several years working on general education and honors reform.

She has served as the executive director of the American Association of Philosophy Teachers, overseeing its biennial conference and expanding programs. Esch is currently the organization’s vice president.

“My education under Emily has made me compassionate, solution-orientated, resolute and slow to anger in the workplace,” a student said of Esch. Another student added that “Emily not only teaches what she preaches but practices it as well and works to advocate for our campuses and inclusion, diversity and students.”

Shouse, who has taught at CSB and SJU since 1999, is known as an excellent teacher, dedicated adviser and outstanding scholar who is known for his personable, effective and fair teaching and advising.

He is described as having a passion for teaching in Spanish language, literature and culture and having a natural ability to weave students into discussion. Shouse uses his assignments to help his students build real life skills.

“He is an engaging, enthusiastic teacher who used his beloved Latin American literature and fil to mold CSB/SJU students into more critical thinkers, skilled workers, competent speakers and productive citizens of the world,” a former student said of Shouse.

Smith believes “that once students begin to identify and question the ways that gender structures their lives, they can begin to peel back the layers and challenge systematic inequalities while understanding themselves and others for their true gifts.”

She is committed to the study of gender in both the classes she teaches and the research she conducts. Smith, who has taught at CSB and SJU since 2013, teaches her students a new way to look at the world, and to pay attention to the things that they are taught, both subliminally and explicitly.

Benesh, who has taught at CSB and SJU since 2008, has been described as an invaluable member of the mathematics department and the greater community, demonstrating a mastery of teaching, excelling in scholarship as well as service.

“His motivation to try new ideas is inspiring, and the careful consideration he gives to each mode of teaching demonstrates his focus on benefits for students,” a colleague said. “He emphasizes posing good questions, giving students time to develop their own ideas as well as time to build the ability to communicate their ideas.”

“Everyone who wants to teach should be required to take at least one of Bret’s classes,” added a former student.

Special appointment: Christi Siver, to the Joseph Farry Professorship within the Eugene J. McCarthy Center for Public Policy and Civic Engagement. Siver will work with debate programming, educating and enabling members of the CSB/SJU community to engage in civic and civil discourse on serious public policy issues.

Academic advising awards: Kristy Hendricks, instructor of education; John Kendall, writing center. The Academic Adviser of the Year Award was established in 1985. It is awarded to two faculty and/or professional advisers who have distinctly contributed to the advising program, as well as to individual student development and growth throughout the academic year.