There are 457 Enactus chapters located on college campuses across the country, as of August 2016. 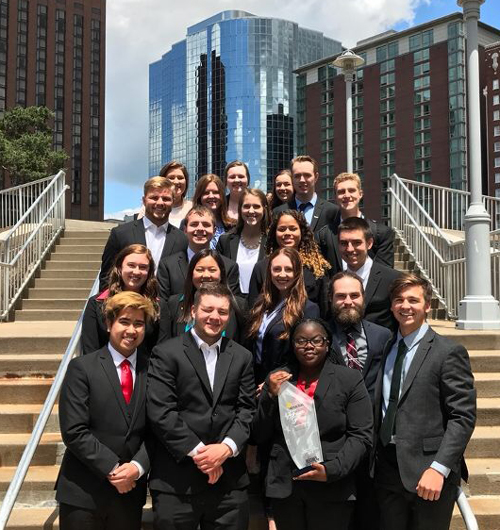 One of those chapters is at the College of Saint Benedict and Saint John’s University. And on May 23, the CSB/SJU Enactus team advanced to the semifinal round of the Enactus National Exposition in Kansas City, Missouri.

“It is a phenomenal finish,” said Steve Schwarz, visiting assistant professor of global business leadership at CSB and SJU and a co-adviser to the team. “I think we had a similar finish two years ago (in 2015, when CSB/SJU was a top 16 finisher), but they changed the competition rules, and I would say this is the best finish we’ve ever had.”

“I’ve been the faculty adviser or co-faculty adviser (to the team) every year since 1999,” added Paul Marsnik, professor of global business leadership at CSB and SJU. “This is the first time in those 18 years that I’ve had the opportunity to be up on the stage in the final 16.

“I was up there with Maeve Adam, our (student) president, and we received the award. It was pretty awesome,” Marsnik said.

CSB and SJU were joined by the University of St. Thomas and Southwest (Minnesota) State University as the only Minnesota schools in the national competition, but the Tommies and the Mustangs did not advance to the semifinals.

The CSB/SJU team presented on two of its six ventures that most closely align with the Enactus criteria of entrepreneurial action, empowerment and social impact. Those local ventures included Square One, which seeks to create lasting micro-business ventures in developing countries, and Alex’s Lemonade Stand, which helps raise money to fight childhood cancer.

“I would say hats off to a lot of people, but Precious Drew is the competition coordinator,” Marsnik said. “She just understands the whole process and is a good motivator.”

The team consisted of six global business leadership majors and an economics major (Harala). They prepared, memorized and gave a 19-minute presentation to a panel of executive judges, followed by a five-minute question and answer session.

Overall, 19 CSB and SJU students attended the exposition. Over 150 companies were also represented at the Exposition, giving the students a chance to network with corporate executives, including Wal-Mart and Unilever.

Enactus was founded in the United States in 1975 and the U.S. is now one of 36 countries from around the world that operates an Enactus program. The U.S. operates as a division of Enactus and with more than 16,000 student participants, it represents the single largest country operation.