Home / Newsroom / Home may be St. Paul, but Thailand is where Yang’s heart lies

Home may be St. Paul, but Thailand is where Yang’s heart lies

Editor’s note: This feature story on Daniel Yang ’18 is the seventh and final story that will appear this summer on the College of Saint Benedict and Saint John’s University website featuring graduates who received awards from the Fulbright U.S. Student Program. 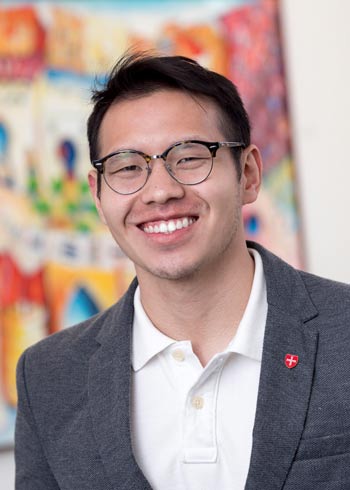 Daniel Yang was born and raised on the East Side of St. Paul. Needless to say, it is a long way from Thailand.

But for Yang, home will always mean the southeastern Asian country.

That’s why the 2018 Saint John’s University graduate with a degree in communication was more than eager to write “Thailand” on his application for an award from the Fulbright U.S. Student Program, sponsored by the Department of State and the J. William Fulbright Foreign Scholarship Board.

He was ultimately selected to serve as an English Teaching Assistant (ETA) in Thailand. Yang will be teaching at the Sansai Wittayakem School in the San Sai district in the province of Chiang Mai.

He was one of seven CSB and SJU graduates to receive Fulbright awards (John Beckius ’18 was a late addition to the group, and will serve as an ETA in South Korea). In the last five years, 30 students or graduates from CSB and SJU have earned Fulbright ETA awards.

“Ever since my second year in college, I knew I wanted to apply to the Fulbright program,” Yang said. “I didn’t know how I was going to do it, but something inside me knew that this program was for me.

“I selected Thailand because I saw this as an opportunity to go back home. Even though I was born in the U.S., I always felt a longing to see where my parents came from,” he said. “While my parents were born in Laos, they fled the country to escape genocide during the Secret War (1959-75, also known as the Laotian Civil War).”

It is estimated that up to 300,000 people from Laos fled to neighboring Thailand following the Pathet Lao takeover in 1975 — including Yang’s parents.

“After many months of surviving through the jungle, my parents found refuge in Thailand,” Yang said. “They were accepted into the refugee camps, and even though life was still difficult, my family called Thailand their second home.

“Other than the fact that I will be doing what I love, which is working in education, I see this opportunity as a pilgrimage to myself — to journey back to my own cultural roots and see where my family and ancestors came from. Being in Thailand for a year will give me a deeper understanding of my cultural identity,” he said.

Yang did a good job of that while attending SJU.

He served as chair of the Cultural Affairs Board, and was the Fellows Chair for the Senior Class Committee. He developed a mentoring program for historically underrepresented students at SJU called “Justice” during spring semester 2018 while serving an internship with SJU Student Development. He also was able to create a support group for Hmong students at SJU called “We Are Hmong Brothers,” giving students a place to speak about their identities.

He’s come a long way, and in many ways Yang thought the odds were stacked again him.

“There were so many points in my life that were challenging and times I had no hope for the future. But I learned to use these negative labels and moments in my life as motivators to help me achieve,” he said.

Yang believes his Fulbright experience will continue to help solidify his passion for education, cultural exchange and mitigating educational disparities for Southeast Asian Americans in the United States.

“As a first-generation American and college student, education has given me the ability to help my family out of poverty. It has been a key contributor to my success, and I hope with my Fulbright experience I can continue to work spaces that will inspire other students to be the change they want to see in the world,” Yang said.

“I will always look back to this moment as a reminder to myself that anything is possible if you put hard work, dedication and passion into it,” he said.