But it if there was one in particular that hit the 2006 Saint John’s University graduate the hardest, it came on his daughter’s third birthday.

On that day, with his family celebrating at home in the safety of the United States, the Foreign Service Office with the U.S. State Department was at the gates of Hamid Karzi International Airport. Tokic was helping identify and process individuals who qualified for evacuation in the wake of the final pullout of U.S. forces and the takeover of the country by the Taliban.

“That morning, I got up before the crack of dawn. As I was strapping on my body armor and my helmet before heading to the North gate, I prayed to not die on that very day,” Tokic said earlier this month via e-mail. “I did not want to ruin her birthday forever. I tried filming myself singing happy birthday to her, but could not really keep it together, so I gave up.”

The road that eventually led Tokic – a native of the Balkans – to Kabul last summer began in the fall of 2002 when he arrived as a freshman in Collegeville.

“Being at SJU led me on a path of becoming an American diplomat, an honor I could have not dreamt of when I came to Collegeville,” he said. “Education at SJU instilled in me a sense of professionalism and (a) desire for public service.”

That desire is why he continued his education at the Harvard Kennedy School, the public policy school of Harvard University, following his graduation from Saint John’s. There, he earned his master’s degree before returning to the Balkans in 2008 to spend several years working for a number of international organizations – including the United Nations – focusing on human rights.

He eventually returned to the U.S. to marry his wife, whom he met in graduate school. He then went to work on democracy building in Asia for the International Republican Institute and as a contractor analyzing security issues in the Balkans for the Department of Defense.

But after becoming a U.S. citizen, he decided to take the Foreign Service Officer test and passed.

“My first diplomatic assignment was in the Philippines (Manila) where I worked for two years as consular officer (vice consul) adjudicating U.S. visa application and assisting American citizens in need,” he said. “I arrived (in) Kabul (this past) July for what was supposed to be a year-long tour adjudicating Special Immigrant Visas for local nationals who have supported U.S. government efforts in Afghanistan over the last two decades.

“I had no prior Afghanistan experience aside from closely following the news from there. (But the) State Department devotes significant resources and time to train its officers before every tour.”

That year-long assignment would soon be truncated by events on the ground as the decision to end the U.S. military presence in Afghanistan after two decades, dating back to the aftermath of the Sept. 11 attacks, was followed quickly by the Taliban consolidating control.

That meant hundreds of thousands of Americans and Afghan nationals needed to be evacuated as quickly as possible.

“When I arrived (in) Kabul, the greatest focus was given to processing Special Immigrant Visas for the Afghans who have assisted our efforts there,” he said. “As we saw that the situation deteriorating, the vast majority of the mission worked seven days a week, each of us working 80 hours a week, to enable qualified Afghans to immigrate to the United States.

“As we evacuated to the airport my role shifted. Alongside other consular colleagues and the core embassy team, we worked hand-in-hand with our military colleagues to evacuate American citizens, eligible Afghan nationals and other foreigners. In any situation of upheaval or emergency anywhere, consular officers are usually the last ones to leave, as priority No. 1 for the U.S. Department of State is to protect and assist U.S. citizens overseas.”

In all, over 122,000 people would be evacuated under extremely dangerous conditions. Nowhere was that danger more apparent than in the early evening of Aug. 26 when a bombing at the airport gate killed 13 U.S. service members and at least 170 Afghans.

The terrorist group Islamic State-Khorasan (ISIS-K) carried out the attack. An account in the Washington Post stated the attack was carried out by a lone operative wearing a suicide vest containing an estimated 20-to-25 pounds of explosives.

“U.S. officials said the bomber slipped into the crowd near where the Americans were conducting hand searches,” the newspaper reported.

Tokic said when he was inside the U.S. Embassy bubble, he felt safe, though “we were all, however, greatly concerned about (the) well-being of our amazing local colleagues who would go home at the end of the workday.”

When he was shifted to the airport, he said the situation became far more tenuous.

“When we were at the gates of the airport processing people, we were exposed and vulnerable,” he said. “At some points, you would find yourself standing a few feet away from the armed Taliban. However, there was work to be done. The human tragedy unfolding in front of your eyes, and the intensity of the situation, makes you focus on your work and pushes all fear aside.

“Being surrounded by our amazing military counterparts and Diplomatic Security personnel also helped us manage the situation. In retrospect, I guess I felt safer than I should have. A few days before the explosion that killed 13 service members, I was in front of Abbey gate with the Marines. I will always owe a huge debt for their sacrifices. They died so that I (could) come home to my family. They will be honored and remembered as long as I am alive.”

In the midst of the chaos and uncertainity, Tokic said certain moments did stand out.

“One thing that comes to mind is how collected and calm everyone was during the last day at the Embassy and evacuation process,” he recalls. “I remember, amidst all the chaos, one colleague was parking a gator (vehicle) as I was walking past her – literally two hours before we boarded the helicopter to transfer to (the airport). ‘Am I blocking the sidewalk?’ she asked with concerned face. My response was satirical: ‘Really, this is the concern you have today!’ And we both started laughing.

“Another thing I will never forget is the first day at the gate when I identified an Afghan colleague who worked with us in the consular section. He was far in the crowd with his wife and six children. Crowds were crushing at the gate and there was no way that any child would survive if they got in there. Through a lot of persuading and negotiating with the crowd, I was able to pull him in.

“So there we were hugging each other, crying – knowing he (would) not face an almost certain death, but also heartbroken and beyond concerned for his family. I am happy to report, however, that few hours later, largely due to heroic actions of some Afghan Commandos, we were able to identify and pull his family out of the crowds.”

Tokic said maintaining communication with those he was working with – even with all that was going on around them – was key to making sure they got as many people out safely as they could.

“We used any means possible,” he said. “All consular officers had radios on them, so that was one way to pass the information. Another was (the) use of cellphones to send information and photos of qualified individuals so that we (could) spot them at the gates. We had to be creative. At times we would ask people to wave items over their heads, or to be by (a) certain car or a telephone pole so that we (could) come and get them. We also used geographical pin drops on Google maps for such purposes.”

Now back safely in the U.S., Tokic is preparing for his next tour – a year-long assignment to Islamabad, Pakistan. His wife, who is also an American diplomat, and his daughter will be going to Wellington, New Zealand on her next assignment.

Tokic said he is scheduled to join them there sometime in 2022. And throughout the peril of his work in Kabul, he said he tried to draw on lessons that were instilled in him during his time at Saint John’s.

“One of the most important things that comes to mind from Saint John’s that I attempted to apply at the (airport) gates was a phrase from the Rule of Saint Benedict: ‘Let everyone that comes be received as Christ,’ ” he said.

“I am not Catholic, or very religious for that matter, but that phrase stuck with me, and I did my best to apply it in those chaotic days.” 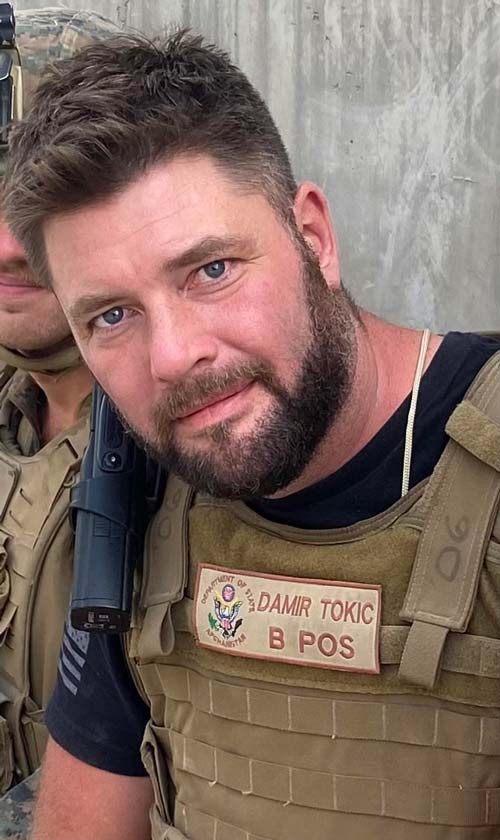 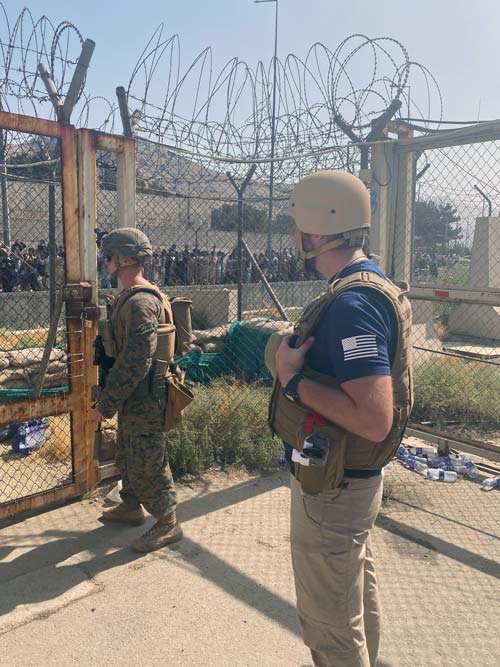