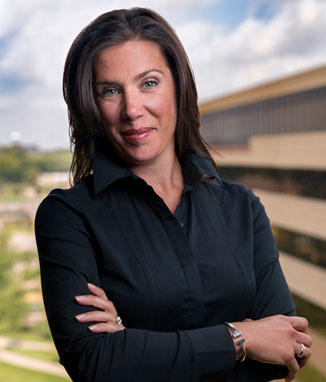 Not long after Corie Barry was named chief financial officer (CFO) at Best Buy Company, she decided to do a quick "audit" of the top 1,000 companies in America.

The 1997 College of Saint Benedict graduate was curious how many of those companies had female CFOs.

"I didn't want to be a female CFO to prove a point," Barry said. "It was more like an afterthought that I looked at it, because I felt like I had such a foundation that was built (at CSB), and I continue to bring that passion with me around what women can do in both the working world and obviously lots of other areas, too.

"But I think I wouldn't discount — and never will — having that as my starting point," Barry said. "I think that brought me a level of intestinal fortitude that was very different.

"There was something really important for me going to an all-women's school, and having it juxtaposed with so many of my classes being co-ed in nature," Barry added. "I got this amazing ability to really focus on women's leadership and women's issues, but at the same time I had this balance with discussions on an average day that included both men and women. It jolted me, and it gave me a great deal of confidence and passion around this idea that you really as a woman can do anything."

Barry assumed her new post on June 14 after working with the company in various financial roles since 1999. AS CFO, she oversees audits and closing the books among other duties, and replaced Sharon McCollam, who retired from the position.

"My personal belief — and I learned this from Sharon — I think the best CFOs are very operational in nature," Barry said. "There are CFOs who try to deeply understand the business, and then can translate that into financial outcomes. So, I actually spend a great deal of my time learning about and understanding how the business works, and then try to think about how we could construct the business differently and deliver the best financial outcome for the shareholders.

"Sharon said that to me early in my career, and now I can feel that weight. The shareholder is constantly on my shoulder. Every decision that we make as a leadership team I'm trying to think about that constituency above all others. It's my job to be the constant voice of how to think about the shareholder and ultimately our employees and all of our own engagement in the financial returns of the company," Barry said.

Surprisingly, not long ago she would never have dreamt about the financial returns of a company. When Barry came to CSB in the fall of 1993, she wanted to be a chemical engineering major and complete the Honors program.

"I loved the subject matter, and I did well at it," Barry said. "I loved my professors, obviously, like everybody does. But it wasn't clicking for me. You get a feel pretty quickly for, the majority of your life is going to be focused in a way that doesn't feel like it fits, which was really hard for me. Being a high achiever, it was hard to think about giving up on this thing."

Not sure what way to go, she turned to her first-year symposium teacher, Ernie Diedrich, professor emeritus of economics at CSB and SJU.

"I can say that Ernie was life-changing for me," Barry said. "I just sat down with him and said, 'Oh my goodness, am I a failure? Where do I go from here?' He did a nice job of just kind of coaxing out of me, 'What is it you actually like to do? In your first year, what resonated with you?'

"I just realized that the things I liked were very math-based, very linear, very ... they had an answer. I was really drawn to that world. And he said, 'You may want to try an accounting class. What's the worst thing that could happen?' It is a skill set, and one of the things a liberal arts education opens up for you is pursuing things you might not otherwise do.

"That really freed me up think differently about how I was going to pursue my education. I thought, 'Well, I will take an accounting class and see what I think,' and sure enough I loved it."

A switch to accounting

Her first accounting class was with Lucy Larson, professor emerita of accounting at CSB and SJU, "just a cool, laid-back accounting professor," Barry said. "There were four people that were really instrumental in my life and my life at Best Buy, and Lucy was absolutely one of them."

Following her graduation with degrees in accounting and business administration, Barry spent two years as a public accountant at Deloitte and Touche, one of the "Big Four" accounting firms.

"The truth is, I didn't come to Best Buy because I loved retail, or I loved CDs. I interviewed with a woman named Anne Loughrey. I wanted to go work for Anne. I thought in my mind, coming from Saint Ben's, here's a woman who's finding her way in a pretty typically male-dominated industry, she's in a pretty high position in the company and she seems interested in helping me advance my career and do things in my career. That was incredibly appealing, and then the company was cool, too. "

Barry said that the liberal arts has helped her in two ways.

"You spend a disproportionate amount of time learning how to speak softly, crisply and then how to write in a way that takes a myriad of complex things and starts to make them simple," Barry said. "That is my day in a nutshell. I don't think people give enough credit practicing how to speak and how you write and being very thoughtful about that.

"The second piece — and it ties right in — is critical thinking. ... That idea of pushing yourself to think in a really different way about subjects you never would touch otherwise, that for me has come to life more often than anything else," Barry said. "And, that well-rounded ability to think around the edges of things, to see the world from other people's perspectives, to open yourself up to listening how someone else sees the world, those are the skills I use more often.

"Yes, baseline accounting knowledge is super important. You've got to have the basics. But especially as you progress your career, it looks a little less about your technical skills and a lot more about some of those other skills that I think a liberal arts education sets an amazing groundwork for."

Best Buy chief financial officer Corie Barry was asked what advice she would give CSB/SJU students majoring in accounting and/or global business leadership. Here were her responses: