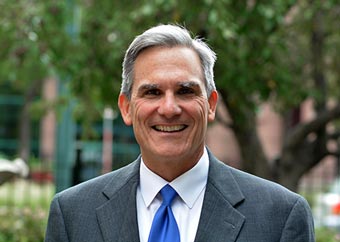 Tim Marx will receive the Colman J. Barry Award for Distinguished Contributions to Religion and Society from Saint John's University on Friday, April 26.

The award will be presented during a private dinner as part of Saint John’s Day activities.

He works extensively with faith, civic and public policy leaders, community partners, donors and volunteers to advance the vision of a community where there is poverty for no one and opportunity for everyone.

“I accept the award on behalf of so many people who were my friends and mentors,” Marx said. “And I include in them Fr. Colman Barry—I was a student in his Church History class.”

He has previous experience as an attorney, public official, nonprofit leader and other civic involvement.

“The Benedictine values of worship, the dignity of work, and service were a guide to a personal life, a spiritual life, and a professional life. And I saw those values every day at Saint John’s and also in the life of Colman Barry,” Marx said.

The award was established by Saint John’s in memory of Barry, a Benedictine monk of Saint John's Abbey, professor of history and eighth president of SJU (1964-71). His life was distinguished by initiatives designed to enrich the cultural and religious life of society, and was especially passionate about the intersection of culture and religion.

Among Barry's many contributions was the founding of the Hill Museum and Manuscript Library, establishing Minnesota Public Radio, and creating the Jay Phillips Chair in Jewish Studies and the Jay Phillips Center for Interfaith Learning.

Other recipients of the award include Donald Jackson, the artistic director of The Saint John's Bible, and his wife Mabel Jackson (2011); author and professor emeritus Jon Hassler (2003); and architect Marcel Breuer (2002), who designed the Abbey and University Church and other buildings at SJU.