30 years later, SJU graduate is a leader in the Army

Brig. Gen. John Weidner is an example of a career officer who never intended to make the Army a career.

“Although I was interested in joining the Army, I was definitely not interested in a military career. In fact, I often say – with full sincerity – that I’ve been getting out of the Army my entire career,” he said.

The 1991 graduate of Saint John’s University and its ROTC Fighting Saints Battalion knew he had to spend a minimum of five years in Army after receiving his commission as a second lieutenant following graduation.

“My initial plan was to spend the minimum five years in the Army and then get out and join the private sector in some technical area,” Weidner said.

But now, 30 years later, Weidner finds himself as deputy director, Plans and Policy for the U.S. Strategic Command (USSTRATCOM), a position he has held since 2020.

He leads groups that develop and maintain war plans; advance USSTRATCOM and Department of Defense (DOD) theories on strategic deterrence; manage the command’s relationship with allied nations and coordinate the assurance the U.S. provides through our nation’s extended nuclear deterrence commitments; and provide feedback and advice on national and DOD nuclear policy, posture and strategy.

Weidner said these efforts will guide the United States’ approach to ensuring national security in light of changes in the global nuclear security environment, “such as China’s breathtaking expansion of its nuclear forces and capabilities.”

“During this time of increased strategic competition with Russia and China, these efforts are more important than at any time since the end of the Cold War,” Weidner said. “As former Secretary of Defense Ash Carter said in September 2016, our nuclear deterrence enterprise is the bedrock of American security. It is what everything else rests upon.

“Our nuclear forces provide the umbrella under which our conventional forces accomplish their missions around the world. It is a great honor to be part of that mission,” he said.

His current assignment marks a return to USSTRATCOM, where he previously served in 2017-18.

“I am very fortunate and honored to be the first Army nuclear and CWMD (countering weapons of mass destruction) officer to reach the general ranks and look forward to enhancing the Army’s strategic deterrence role in this era of strategic competition with both Russia and China,” Weidner said.

One of the reasons he chose to attend Saint John’s was his interest in pursuing an ROTC scholarship. He joined the Fighting Saints Battalion.

“As it turns out, I immensely enjoyed (the battalion) from the start and became as involved as I could,” Weidner said. “I eventually received a scholarship, but that wasn’t really the driver for me to continue with the program and to join the Army. I identified immediately with the team-oriented approach of the ROTC program and its associated training. I was also drawn to the outdoor activities that not only included physical fitness training, but land navigation, patrolling (day and night), rifle marksmanship and field training exercises.

“Perhaps most importantly, it didn’t matter how much military training or experience you had coming into the program. The ROTC program provided every cadet with all of the training, education and equipment we needed to succeed. If one were simply willing to learn, try their best, be where we were told to be and do what we were told to do, we would succeed,” Weidner said.

The award-winning battalion produced three high-profile graduates in a five-year span – Gen. Paul Nakasone, a 1986 SJU graduate who is commander of United States Cyber Command and serves concurrently as the director of the National Security Agency and as chief of the Central Security Service, and astronaut Mark Vande Hei, a 1989 graduate who is currently aboard the International Space Station.

“I am hesitant to speak for General Nakasone and Mark Vande Hei, but I suspect they would agree with me when I say that Saint John’s and the Fighting Saints battalion were instrumental to who we became as officers and men,” Weidner said. “The SJU liberal arts education – influenced by the Benedictine environment and complete with faculty residents in every dorm – certainly helped define and reinforce my moral bearing.

“After all, at its core the Army is a values-based organization. I can’t think of a better environment for an ROTC cadet to solidify his or her value set than the Fighting Saints Battalion,” he said.

Weidner shared much in common with Vande Hei. Both were physics majors, resident assistants in Mary Hall, very involved in the ROTC program and were part of the Ranger Challenge team, a 10-person team that competed against other ROTC programs at the state, regional and national level.

“In addition, we were both commissioned as Engineer officers, and we both served at Fort Carson, Colorado and as assistant professors in the physics department at the United States Military Academy at West Point. Those experiences enabled us to stay connected with each other during the first 10-12 years of our careers,” Weidner said.

One of the professors Weidner fondly recalled from his days at SJU was Dr. Angeline Dufner, who was his freshman symposium professor.

“She was amazing,” Weidner said. “I was never very comfortable writing papers and knowing I would have to write dozens of papers my freshman year was a very intimidating thought. Professor Dufner had a fabulous way of criticizing – in the purest sense of the word – the papers I wrote in a way that not only gave me the confidence to approach writing assignments with self-assurance but helped me realize that writing can be enjoyable.

“The ability to communicate in writing effectively and concisely is a required skill for all leaders, and Professor Dufner cultivated my writing skill to the point where I considered it a strength. I would never have imagined that was possible in my first year at SJU. She was a gifted educator because she helped her students grow and mature by treating each as an individual and tailoring her feedback to each student’s strengths and weaknesses,” Weidner said.

Weidner has been unable to return to SJU much in recent years due to his duties and family commitments.

“I would like to get back to SJU soon, though,” Weidner said. “It was so foundational to my development it would be unimaginable to never return. Plus, there is no better place to get Johnnie Bread!” 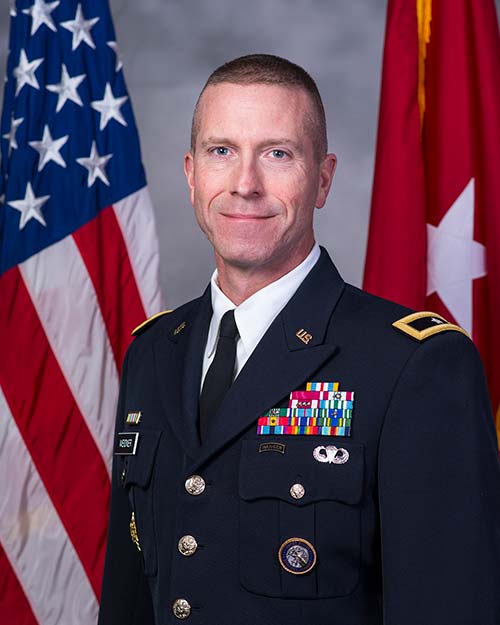