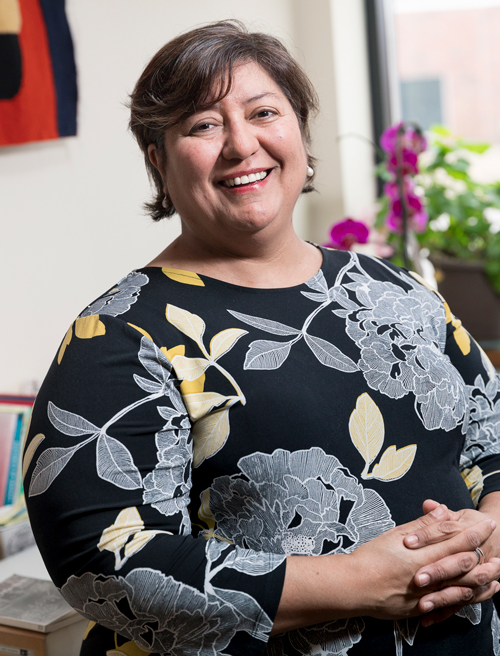 For Patricia Bolaños-Fabres, associate professor of gender studies and Hispanic studies at CSB/SJU, those opportunities have led to a prestigious Fulbright U.S. Scholar Award from the U.S. Department of State and the J. William Fulbright Foreign Scholarship Board, which will allow her to travel to Ecuador and conduct research.

Bolaños-Fabres’ discovery began while leading a three-week Gender and Culture course in Otavalo, Ecuador. “The class had a service-learning component that put students in touch with indigenous people,” she recalled.

In listening to those conversations, she eventually became aware of elements of Kichwa (an indigenous language native to Ecuador and other Andean countries including Bolivia, Peru and Chile) in the Spanish spoken by both the indigenous and Mestizo people of the region. Driven by curiosity, she began researching and conducting interviews, eventually publishing “Popular Expressions and Language Contact: Ecuador” (2015) in the Spanish phraseology journal Paremia.

While researching for this article, she noticed a distinct lack of scholarly research on the influence of Kichwa.

“There was so much more to study,” she noted. “I’ve been in contact with leading scholars in Kichwa-Spanish bilingualism and there is curiosity about the extent of the presence of Kichwa, but no one knows in what form it exists, to what extent it exists or where it is most prevalent.”

So in fall 2015, when Ann Walter, an ambassador from the Fulbright program, came to campus to talk with faculty about possibilities for international research grants, Bolaños-Fabres seized the opportunity.

“The idea was there and I knew there had been very little study done on this topic, so I went to talk to Catherine Stoch and Diane Calabria in the Office of External Grants,” she said. “They were able to help refine my application and line up the necessary paperwork and make sure everything in the application process was in order.”

With help from Stoch and Calabria, she looked at available Fulbright grants and discussed where she should apply.

“I went with Ecuador because it’s the country in the region with which I am most familiar. I’d like to follow up in future years and study the substrate in other Andean countries,” Bolaños-Fabres said.

The Core Fulbright Scholar Program offers over 500 teaching, research or combination teaching/research awards in over 125 countries each year. “This is an extremely prestigious award, and Patricia received it on her first try. This is very impressive,” noted Stoch, director of external grants at CSB/SJU.

Bolaños-Fabres will be taking recordings of samples of oral production across three regions of Ecuador (coastal lowlands, Andean highlands and the Amazon River) over four months, spread over the summers of 2017 and 2018. Additionally, she has received an internal CSB/SJU Collaborative Faculty/Student Research grant that will allow Tucker Lorentzen, an SJU senior economics and Hispanic studies major from Brooklyn Park, Minnesota, to accompany her. Lorentzen will conduct research on the prevalence of perceived discrimination among indigenous peoples and its effects on their employment.

“We’re very proud of Dr. Bolaños-Fabres and her Fulbright grant, which reflects the importance and relevance of her research in language and cultural heritage,” said CSB/SJU Provost Richard Ice. “CSB/SJU has had great success developing graduates into Fulbright English Teaching Assistant (ETA) award winners, and we are delighted to expand the number of our faculty who join the Fulbright community as Fulbright Scholars.”

In the last three years, 20 CSB/SJU students and recent graduates have earned Fulbright ETA awards. CSB is currently the nation’s 25th ranked producer of Fulbright Students. However, it’s been since 2009 that a faculty member has been recognized as a Fulbright Scholar.

Later this month, CSB/SJU faculty will get the chance to begin increasing those numbers through a visit from Fulbright Alumni Ambassador Dr. Brian Polkinghorn, who is a distinguished professor and program director in the Department of Conflict Analysis and Dispute Resolution, as well as the executive director of the Bosserman Center for Conflict Resolution at Salisbury University in Maryland.

Polkinghorn will discuss his own Fulbright experiences in a presentation to CSB/SJU faculty on Tuesday, April 18. The following day he will be available for one-on-one sessions with faculty to answer questions and offer consultation and encouragement on possible Fulbright grant applications.

“Dr. Bolaños-Fabres’ award makes manifest the strength of our faculty in providing transformative educational experiences both on campus and abroad,” Ice said. “With her example and Dr. Polkinghorn’s guidance, I see great potential for faculty research possibilities in the near future.”

Faculty members interested in learning more about Polkinghorn’s visit and the Fulbright grant application process can contact Catherine Stoch or Diane Calabria in the Grants Office.