Fulbright ETA winner is running back to German soil 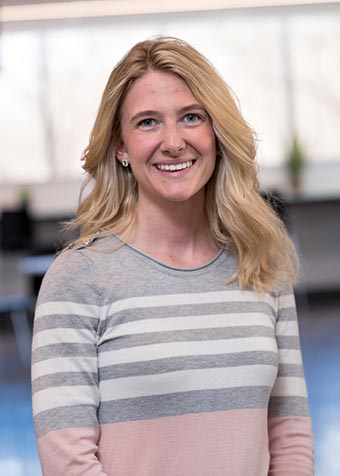 Editor’s Note: This feature story on Ali McGraw ’19 is the fifth of six feature stories that will appear this summer on the College of Saint Benedict and Saint John’s University website featuring graduates who received awards from the Fulbright U.S. Student Program.

Ali McGraw may be traveling to a different country to teach, but she already has a strong advantage.

She knows what it’s like to be in her German students’ shoes.

In high school, McGraw participated in the German-American Partnership Program, which partnered students from a high school in Karlsruhe, Germany, with students like McGraw at Litchfield (Minnesota) High School. The students each spent three weeks at the others’ high school.

Through this experience, McGraw, who was already very interested in her future major of elementary education, paid close attention to student-teacher relationships.

“I often noted differences and tried to recognize them as that,” McGraw recalled, “not worse or better, just different.”

The 2019 College of Saint Benedict graduate has been granted the opportunity to continue immersing herself in German schools. On Sept. 9, an award from the Fulbright U.S. Student Program will send McGraw to Hamburg, Germany, as an English Teaching Assistant.

McGraw’s experience with the GAPP helped prepare her for her Fulbright experience in Germany.

“The (Fulbright) program is important to me because it is giving me the opportunity to become more of a global citizen and advocate for education, specifically special education,” McGraw said. “Everyone deserves access to a quality and fair education. Students who have exceptionalities are contributing members of society and they deserve to be included in society from birth.”

In a teaching position, she wants every student to have equal opportunities for success.

“Overall, I want to gain new perspectives and take an active role in my new community,” McGraw said.

A particular role McGraw is looking to take on at her school is the founder of a cross country team.

“My German school doesn’t have a team,” McGraw explained. “Being on a team gives students an automatic support system and a sense of belonging. Cross country runners become close with their teammates because they have a lot of time to talk about life together on runs.”

As a member of the CSB cross country team for four years as well as the Litchfield High School team for two years, running and being on a team are two important parts of McGraw’s life.

“Running is awesome,” McGraw said. “Almost everyone can do it. You just need to put one foot in front of the other.”

It’s also the most feasible sport for McGraw to implement in her school. The lack of equipment and facilities needed for a cross country team make it less costly and difficult to coordinate than a sport like hockey.

McGraw also played hockey for four years, ran track for three years and played tennis for two years at Litchfield High School. She ran one year of track at CSB.

McGraw has gained many friendships and boosted her confidence being part of these teams. She’s excited to bring these opportunities for growth to her students.

“At the College of Saint Benedict,” McGraw concluded, “I have been prepared to think critically, lead courageously and advocate passionately. I am excited to bring these skills with me to Germany.”

CSB and SJU students interested in applying for a Fulbright Award for the 2020-21 academic year should contact Phil Kronebusch, professor of political science and coordinator of competitive fellowships at CSB and SJU, or Lindsey Gutsch, Program Coordinator for Undergraduate Research, Competitive Fellowships and First-Year Experience.