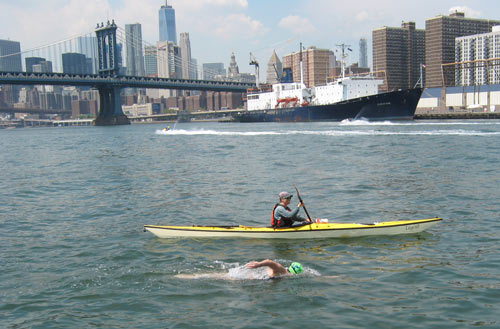 Abbey Brau has a new goal in mind.

After four years of swimming collegiately at the College of Saint Benedict, Brau is attempting to complete the Open Water Swimming Triple Crown. She has finished one of the three events, the 28.5-mile swim around Manhattan Island in New York in July 2016, and needs to complete the English Channel and Catalina Channel swims.

Brau, a senior account manager at Periscope, a marketing and advertising agency in Minneapolis, defines herself as an open-water swimmer. But she has overcome obstacles to do that.

Just before her graduation in 2010, Brau was diagnosed with Type 1 diabetes.

Type 1 diabetes is an autoimmune disease where the body no longer produces the hormone insulin that helps to move glucose from food out of the blood stream and turn it into energy. The disease causes blood glucose levels to reach extreme and toxic levels and has to be carefully managed throughout each day.

For Brau, that meant that she would have to make a lot of adjustments to her athletic routine.

"Over the last seven years, I've been slowly building my goals and lengthening the list of open-water swims around the world that I want to complete," she said.

Prior to the New York swim, the longest race Brau had completed was the 12.5-mile swim around Key West, Florida, in June 2013. For every race, each swimmer has to provide their own kayaker to follow them during the race and provide nutrients during the swim. Brau's sister was her kayaker for the Key West race, and since Brau was competing with Type 1 diabetes, she had to be a lot more cautious about what she was using to fuel herself during her race.

Swimmers are not allowed to touch the support boat that is following them to make sure they are swimming for the entirety of the race. This meant that every time she had to check her blood sugar levels, she would have to do so while treading water beside the boat.

"One of the biggest challenges with being an open water swimmer and also Type 1 is that you need to check your blood sugars manually every 30-60 minutes," said Brau, noting that she also had to deal with the sun and intense heat. Still, she finished the Key West swim in five hours, 13 minutes.

After Key West, Brau took on the marathon swim around Manhattan Island in New York. This was the longest swim — in time and distance — that Brau has completed. Brau trained for four months, swimming hour-long practices during the week and long swims on the weekends.

"The longest swim I did leading up to MIMS (Manhattan Island Marathon Swim) was a 6.5-hour swim after swimming on a relay team during the Life Time Triathlon," she said.

When it came to the race itself, Brau could not have had a more perfect day for the swim. The water temperature was in the low 70s and it was about 75 degrees in the air and slightly overcast, so not too sunny. Brau had her mom and sisters as her support crew, and they kept track of her feeding schedule, her blood sugars, her distance, her time and her mental well-being throughout the race.

"The swim felt amazing — one of the best swims of my life. For the most part, I felt great and strong the whole time," Brau said. "I ultimately swam 30.5 miles instead of the typical 28.5, due to currents around the island and how I hit them at a certain time of day."

Type 1 diabetes did not take away from the athletic life that Brau wanted to continue to maintain. She now uses her diagnosis as a way to inspire others to work toward their goals as well.

"I have the ability to do these swims and I feel as though I need to use that ability and opportunity to encourage and inspire others. I was diagnosed with an annoying and life-threatening disease, yes, but it didn't take away my ability to move and be active," she said.

As if swimming marathons were not enough, Brau rode her bike across the country from New York to San Francisco as a member of Team Bike Beyond from June to August, 2017. The bike ride was a fundraiser to benefit Beyond Type 1, which is a nonprofit organization that informs people about Type 1 diabetes. The team, all of whom have Type 1 diabetes, totaled 4,205 miles in 70 days and raised $750,000 during their cross-country bike ride.

"It was an opportunity to show others living with Type 1 that you can do anything you set your mind to, even if it's something you've never really done before," Brau said.

Brau said that swimming in college introduced her to the idea of open-water swimming. CSB assistant coach Mike Ritchie suggested open water swimming because he believed that she could excel in distances longer than a mile, which is the longest race in collegiate swimming (she still holds the second-best time in CSB history in the 500 and 1,650 freestyle events, and is third in the 1,000 freestyle).

"I can't imagine my life without the people and experiences I've taken from my time on the CSB swim and dive team. The support, strength and talent of those women, in and out of the pool, have truly inspired me to work harder, reach further and accomplish any goal I set my mind to," Brau said.

"I was encouraged and pushed and believed in," she said. "That is a big deal and very important. I graduated with a lot of challenges ahead of me and yet, I knew the goals I had set before diagnosis were still accessible to me."

Brau plans to compete in the Boulder (Colorado) Ironman competition in June 2018. “After the Ironman, I’ll definitely get back to the swim life,” she said. “I definitely miss it, but right now just feels like the best time to tackle the Ironman.”

Brau's life was changed when she was diagnosed with Type 1 diabetes, but despite the obstacles she faced, she persevered and accomplished everything she set her mind too.