It's a long way from the CSB/SJU campuses in Central Minnesota to a public school classroom in New York City, but for Saint John's graduate Matthew Arnold, it was a natural progression.

"I think CSB/SJU does an excellent job of broadening not just the mind, but solidly developing the entire person," Arnold said. "Leaving CSB/SJU, I had a strong moral compass that guides the work that I do now."

Shortly after commencement ceremonies in May of 2006, that compass directed Arnold to The Big Apple where he began an intense five-week training program with the Teach For America program in anticipation of his teaching assignment in the fourth grade bilingual class at Public School 48 - Police Officer Michael J. Buczek, in Washington Heights, Manhattan.

"As a Teach For America corps member, I enter the classroom everyday knowing that the work I do is part of a broad movement of corps members and alumni that are all working relentlessly to close the achievement gap."

According to the Teach For America Web site, the organization's mission is to enlist our nation's most promising future leaders in the movement to eliminate educational inequality. Each year, recent graduates from colleges and universities across the country vie for these highly selective positions with Teach For America. Those that are selected, such as Arnold, commit two years to teach in urban and rural public schools in our nation's lowest-income communities and become lifelong leaders for expanding educational opportunity.

"On a daily basis, my students prove to me that students in under-resourced schools definitely CAN and WANT to achieve at high levels. They simply need to be provided with the opportunity to succeed and most importantly, the expectation that they will succeed and achieve at the same levels as their peers growing up in wealthier neighborhoods," Arnold said.

With a minor in Latino/Latin American Studies at CSB/SJU, Arnold knew that he wanted to serve the Latino immigrant community in some form as a career. His experiences in New York have shown him that there is more to the immigration debate than meets the eye and that the political debate going on over immigration policy relegates the human side of the issue to the back of the room. "As their teacher, I am charged with the responsibility of providing these students, regardless of citizenship status or native language, an excellent education that will set them up for success in middle school, high school, and ultimately, college," Arnold said.

And Arnold is confident that when he completes his two year commitment with Teach For America he will take with him wherever he goes, the lessons he learned from the students in the fourth grade bilingual class at Public School 48. "Even if I transition out of the classroom, I will always have the experiences of these families to inform the work I do in order to advocate for this group that is powerless in so many ways."

Learn more about Teach For America by visiting their website. 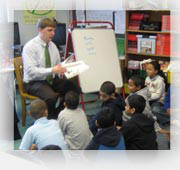