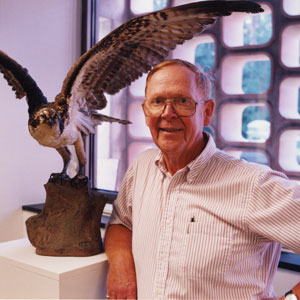 Norman L. Ford, professor emeritus, taught biology at CSB and SJU for 31 years, from 1967 until his retirement in 1998. A specialist in ornithology, he was widely published in his field. His skill as a teacher was formally recognized in 1998, when Saint John's presented him the Robert L. Spaeth Teacher of Distinction Award.

The citation that accompanied the presentation of that award describes his dedication and creativity as a teacher and helps explain why he was so admired by his students ...

"It's 7:45 a.m. on a Wednesday morning. ... Norm Ford is already at work. He came early to gather with his students in a field and listen to the morning silence, the silence and the bird songs which punctuate it.  He came early to help students tune their ears and train their eyes to notice things  — the color of a feather, the tone of a mating call - which the rest of us might pass by, leaving them unnoticed and unknown.

"For more than 30 years, Norm has called his students to a more perceptive understanding of their world. ... Because of his finely crafted presentations and emphasis on critical thought, many students consider Dr. Norm Ford to be the finest professor of their undergraduate careers."