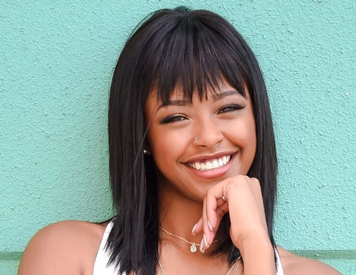 During her time as intern at the Roosevelt Boys and Girls Club, KeAve created the first girls basketball team in the program’s history. Along with her effort to arrange and form the new girls’ basketball program, KeAve also took it upon herself to coach the team. Along with the day-to-day duties of her internship, KeAve led weekly practices and scheduled competitions for the team through a number of tournaments throughout the season. These allowed the players to interact with other teams while learning the importance of sportsmanship and discipline.

The children, KeAve describes, were the most impactful aspect of her experience.

“Not all [club members] are shown the love or given the opportunities they deserve on a daily basis. Being able to help them forget about everything that is not going right in their lives for a few hours is very important to me.”

KeAve recalls her experience as a mentor as one of the most beneficial aspects of her internship — especially to children who were facing tough times at home. She was able to connect with kids and put a smile on their faces for a few hours each week at practices and games. However, the impact that KeAve's work had on each of her players will expand far beyond the basketball court.

“I made a difference […] and I’m remembered,” KeAve said.

What surprised KeAve the most was just how much progress can be made within an organization if individuals are willing to sacrifice their own time and effort for the greater community. Opportunities like this exist in almost every community organization such as the Boys and Girls Clubs, and the lives of countless children positively impacted if individuals have the same determination as KeAve did. Due to her considerable effort and accomplishments, KeAve received a job offer from the Roosevelt Boys and Girls Club in hopes that she will continue her work with the team and other club members. Regardless of where Taylor choses to put her skills to use after graduation, her student internship has shown that she is a remarkable young woman who shows much promise in her future profession.