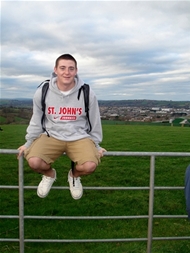 Place of internship: OptumInsight in Eden Prairie, MN (One of the six business segments under UnitedHealth Group)

How did you find out about the internship and what was the application process like?
I found out about this internship through XPD and more specifically within Handshake. I started out by applying for an on campus interview through Handshake by submitting my resume and non-official academic transcript and then waited. Once I received notification that I was one of few selected for the on campus interviews I did my research and prepared for the interview. After the on campus interview UnitedHealth Group asked me to go to their corporate headquarters in Minnetonka where I underwent several interviews and ultimately received the job.

What were some of the internship highlights?
There are so many times that pop into my head as highlights throughout my internship experience, but by far the top three highlights were when I was able to attend an all finance meeting where the CFO of OptumInsight facilitated the meeting, creating reports for auditors, and the company picnic. It was a surreal experience to be in there sitting listening to the CFO talk and be able to relate what he is talking about to what I had learned in class and throughout the summer on the projects I was working on. In addition, my manager gave me a lot of responsibility and half way through the internship he stopped by my desk and asked me to generate some specific reports for the auditors. I was nervous and shocked when he wanted me to do this because I was just an intern. I prepared the reports correctly and my manager as well as the auditors was pleased. Lastly, OptumInsight put on an all employee picnic where everyone who worked for Optum in the Twin Cities was able to come. There was food, lawn games, and a volleyball tournament. Being able to go out with my fellow co-workers and meet other co-workers not in a business setting was really cool experience and allowed me to network myself. Although those are only a few highlights there are plenty more and I would have to say that the entire internship was a highlight.

What was a typical day like? What were some of your major responsibilities?
A typical day for me consisted of getting in at around 7:30 AM every morning and I would then organize what I had to do for the day by creating a to-do list. I would then meet with my manager to go over what I was currently working and what if any new projects, big or small, they might want me to take on. One of my major projects was to do a daily reconciliation for the cash application. OptumInsight currently acquired some new businesses and were in the process of consolidating their banks to avoid fees and create cash savings, but in order to do so they had to create a good way of reconciling and that's where I came in. Every day I would pull data from two different databases and based off those figures I would generate the daily reconciliation. Every so often throughout each month I would meet with the cash group and report out my findings and any trends or themes I had been seeing and based on that we would adjust accordingly going forward. After generating this report every day I would usually work on my other projects like my cap software project, my accrual project, my quarterly true-up project, and my summer intern project that I worked on with 6 other interns from all over. I typically would take lunch for a half hour and then leave everyday around 4 PM. My manager was not so worried about how long I worked everyday but rather he wanted to make sure I was getting my time done in a timely fashion, so some days I only would work for 6 hours while other days I would work for 9 hours. By far my main responsibility was the reconciliation of the cash application process, which I described above. At the end of my internship they told me that this was the best reconciliation that they had since December of 2010. Another one of my major responsibilities pertained to the capital software. OptumInsight had hundreds of software projects that were being worked on and depending on whether it was an internal or external software meant that the expenses could be deferred or not. There were different tack codes that determined whether the expense could be deferred or not and as a result they realized that they could defer a lot more expenses if they went from external to internal. Accordingly, I had to find those projects and create a dollar amount to how much we would be saving from deferring the expenses and also generate specific reports for auditors when they were in the office, which varied upon each request.

What were some of the challenges of your internship?
I would definitely have to say one of the challenges of my internship would be having to get up early every morning and working as what some people call "a real life job or a big persons job." In addition, I found it somewhat difficult to relate what I was doing to what I had learned in classes over the years since each organization has their own way of doing things, but as the internship progressed I found it easier and easier to apply concepts from the classroom to the projects and tasks I was assigned during the summer.

What did you learn?
I learned so much that I wouldn't be able to tell you all of it right now because there would be too much to write about. First, I learned so much material that pertains to my major that you can't learn in the classroom. There is only so much you can learn when doing problems from the book but when you're faced with having to create a report and give it to a senior manager or an auditor you learn it much faster. Furthermore, just the entire culture that I was surrounded by all summer continued to deepen my knowledge in Accounting. I was lucky to attend important meetings with CEO's and CFO's as well as attend employee related meetings twice a month. I also learned the value of being on time to certain things, if you're not ten minutes early, then you're late! Lastly, I learned the importance of communication! Always, always, always keep in contact with your manager or mentor and keep them updated as to what you're doing and how far along you are with a project. My manager loved that I always gave him updates and saw that as one of my strengths.

What advice would you give other students interested in internships?
Do it! Do it! Do it! Do it! Do it! I can't tell you how many of my friends who didn't do an internship wish they would have done one now. It's a once in a life time experience and it gives you a little taste of what the real world is like and if you would like to work for a company like the one you may intern with. The little things that you learn along the way during an internship are priceless and it's a good way for you to get your foot into the door with an organization. Internships are a great way for you to apply what you have learned in the classroom to real-life situations, which is scary, exhilarating, and exciting all at the same time, but it definitely will benefit you in the future.