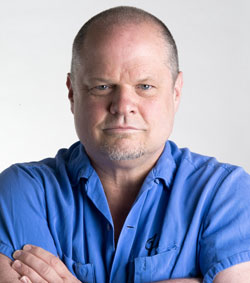 Please give a brief description of your current position and where you're working.  My latest job was doing a week of voice work for Kelsey Grammer's new show "BOSS" which premiered on STARZ network. I am sure you will not be hearing me on the episode. I was providing the voice over for several television news reports which occur during the episode. Local anchors from Chicago stations will be filling in those reports as the series actually takes place here in Chicago. Ah, the life of an actor. So glamorous. Meanwhile, I am doing what the great majority of professional actors are doing...looking for my next job.

What path did you follow to arrive at your current job?  I graduated from St. John's with a BA in theatre in '83 and moved back to my home town of Council Bluffs, Iowa. A year later I moved across the river to Omaha, Nebraska, home of many SJU/CSB graduates. I toured with the Nebraska Theater Caravan in "A CHRISTMAS CAROL", performed in local productions both community and professional, and did the odd local television and radio spots. I was also cast in the ABC cartoon series "STREET SHARKS" as the voice of Slash...yes, Slash. It was better than the character's original name, Captain Bloodbath. No lie! After all, it was a children's cartoon. I even had an action figure. If you have one, I'll sign it for you. That way you can fetch a few more bucks for it on EBay. I also did voice work for the PBS series "LIBERTY'S KIDS" and "ARCHIE'S MYSTERIES" based on the ARCHIE comic book series. And I never had to leave home for any of them. Recorded the voices in Omaha and they were edited in L.A.

In 1996, I moved to Chicago. A friend was working for a production company which was casting a national TV spot for Zenith big screen televisions. She wheedled her bosses into letting me audition and, amazingly, I got the job. My friends always laugh because that is about as opposite the real me as you can get. That job landed me an agent. I was spared the endless rounds of sending head shots and resumes to agents in the hopes that someone would rep me. I was the new "hot property" in town. That is, until my next commercial audition where the casting director pretty much got the idea across to me that I didn't live up to the hype...at all.

Since then I have been in national commercials and provided voice over work for such clients as LONG JOHN SILVERS, MILLER LITE, PONDEROSA STEAK HOUSES, the ATLANTA THRASHERS and FOX SPORTS CHANNEL. That last one made me a superstar at the sports bar where my brother worked!  I have worked in industrial films for such clients as McDonalds.  I also have been lucky enough to perform on the stage of the nationally acclaimed Steppenwolf Theatre, an actor's dream. I also played the prison electrician on FOX's PRISON BREAK.

Actor's employment is seldom continuous; at least not mine. So I have filled in my gaps working as a casting assistant for casting directors here in Chicago. It's a side of the business that very few people know about. I have worked on commercial, film and television projects too numerous to list here. The work can be fascinating, frustrating, intense, and fun, sometimes all at one time.

What advice/suggestions would you have for students who might be interested in your career?  Be prepared! Most director's make their decision about whether they are interested in an actor within the first ten seconds of the audition. Do not get a reputation as an unprepared actor. It gets around quickly and the audition opportunities will stop.

Always be polite and discreet. You never know who anyone is. Case in point: I was at a callback on a Saturday and they had thrown a new script at us and a six page character break down. There were three of us standing in line waiting to go in the casting room. The guy standing in the middle told us in no uncertain terms how he felt about giving up his Saturday and about all the changes coming at us. The third guy turned out to be the writer. I got the job; middle guy didn't.

Rejection is an actor's middle name. Learn to not take it personally. Your job is to give the best audition you can and then get out of there. You have no control over what happens next.

What skills are important in your field?  Listening is the most important skill you can have in this business and is one of the hardest ones to hone. In order to get the job, you have to listen to the directions of the casting director and interpret what they've said. In rehearsal, on stage, on set you have to listen to the directors and embody what they have told you. And you have to listen to your fellow actors while performing because that's what acting is, listening and responding. Interrupting, not paying attention, jumping ahead, not heeding directions will not result in the performance your employers ask for and will not get you jobs...and it may lose you the one you have.

On a purely practical note, it ain't called show BUSINESS for nothin'. Actors are traditionally (sorry, fellow thespians) not very good business people. Believe me, I know. So know your rights and obligations concerning contracts, agent and union fees, residual payments, work day length, etc. because your employers are not concerned with being your accountants.

What activities/experiences were helpful at CSB/SJU (and elsewhere) in preparation for this career?  My acting classes at CSB/SJU were invaluable  in preparing me to create a character emotionally and physically. The techniques taught me have definitely stayed with me until they have become innate. I'm not even conscious of using them, but they affect every audition and job I have. I also was employed, as many of my fellow theater classmates were, at the Benedicta Art Center for my work study program. I did everything from building sets to manning the lights or sound board or stage managing for the many different performances held at the BAC throughout the year. I am not the most technical guy in the world. I was usually told to paint something, even if there was no paint job to be done. But it showed me a whole different side to my chosen profession that I knew nothing about and equipped me with skills I would never have thought to obtain.

One of the smartest things I ever did, once I moved to Chicago, was intern at one of the busiest casting agencies in town. I was the oldest intern since the Ice Age, but I didn't care. I had never been in an atmosphere as charged as that. It was a real eye opener in terms of how my business works from the other side and it was invaluable. It gave me a whole new arsenal of training and made me employable during down times.

What is the most satisfying/rewarding part of your job?  This may seem like a standard answer, but I love to hear the audience laugh. It tells me I've done my job well and it gives me an enormous sense of satisfaction. On the flip side, I also love the silence of an audience when you know they're with you every step of the way. They want to know what's next and can't wait to find out. On a commercial or television set, there is that great feeling when you finish a scene and you know you've made the director happy. Hence, hopefully, a good performance. And if the crew likes you, that's the icing on the cake.

There are an untold number of talented people out there. In Chicago they are coming out of the woodwork. You are surrounded by them. So when someone chooses me for a job, I feel both humble and blessed. There's no feeling in the world like when your agent calls you and says, "You're booked".