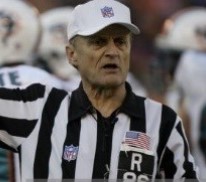 Please give a brief description of your past position and what your work entailed. I was the head official for an officiating crew in the NFL for 15 years. Prior to becoming the head official (Referee), I was a Back Judge for 7 years, which totals out to 23 years as an NFL official.  The job included officiating an NFL game every week-end of the NFL season, which includes the pre-season games as well as the post-season games including the Super Bowl. I was fortunate enough to be involved in 3 Super Bowls, 2 of which I was the lead official and the other I was an alternate official who would enter the game if an on-field official was unable to continue because of injury or illness.  To arrive in the NFL as a member of the officiating staff, I was involved in officiating college football games for 21 years before advancing to the NFL level. I started in the high schools of Minnesota right after graduating from SJU in 1962. I officiated at the NCAA Division III level for 5 years (Minnesota Intercollegiate Athletic Conference), moved into the NCAA Division II level for 12 years (North Central Conference-currently the Northern Sun Intercollegiate Conference) and on to the NCAA Division I level (Big Ten) for 4 years. I also officiated in the World League, which was a league sponsored by the NFL. The league consisted of 6 teams in the U.S. and 6 teams in Europe.

What path did you follow to arrive at your job? I was a pretty good football player for John Gagliardi during my college years, but probably not good enough to play in the NFL. At that time there were only 6 teams in the league and if you didn't come from a Division I school, you probably wouldn't get a look from NFL scouts. So, after I attended the very first Minnesota Viking game in 1961 I watched the officials come out to start the game and thought 'maybe that's my way into professional football'. That's when I started officiating high school football around the cities in the Minneapolis/St. Paul area.

What skills are important for a person in your field? Skills I would highlight include good judgment, good physical condition, somewhat of a good knowledge of football which you gain from playing the game in high school and college, as well as good people skills, and strong communication skills.

What activities/resources did you utilize at CSB/SJU to prepare yourself for this career? As for the activities/resources that I utilized at SJU to prepare myself, I was a varsity football and basketball player for 4 years at St. John's. Those were the best ways to develop the skills needed. I also ran the St. John's Intramural Department and officiated those games while I was a senior player for the football and basketball teams. This helped develop my people and communication skills.

What advice do you have for students that are interested in your career? How can they learn more? The advice I would give students who might be interested in this career is to start officiating junior high, high school and youth leagues as soon as possible. All levels of professional sports, including football, basketball, baseball, hockey, and soccer, need officials. It is a tough road to climb, but not impossible. We have 6 NFL officials, 2 NBA basketball officials, 3 MLB officials and 1 NHL hockey official from Minnesota today.  There are also countless camps you can attend for each of these sports which will help you learn the intricacies of officiating each sport. If you are fortunate enough to make it to the professional leagues, the money is considerably better than most other professions that I know of. Students can learn more by talking to those who are involved currently or those that have been involved in the past.  Currently, I know of three other SJU graduates who are officiating college football at the Division I level. I'm sure those 3 have aspirations about becoming a member of the NFL staff.