Studio One
Home / Studio One / About / History 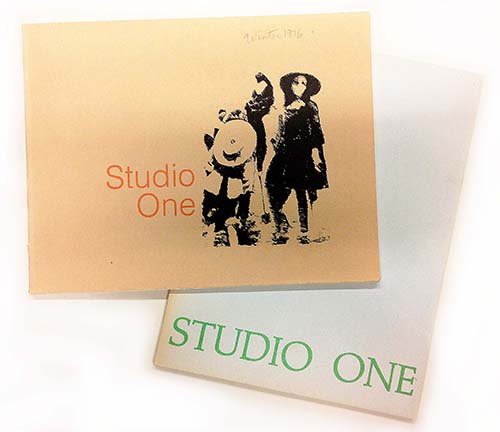 Studio One has showcased the work of writers and visual artists for 40 years, being first published in 1976. Originally funded by the CSB Student Government, Studio One began as bi-annual journal founded at a meeting of artistically-minded CSB/SJU students at a cabin near Lake Superior.

Founding editor of Studio One (and now Artist-in-Residence at Trinity College and the author of three books of poetry, Clare Rossini) declared that the journal would "support the members of our Minnesota community" dedicated to the production of art, a decree that Studio One has followed throughout its subsequent history. Rossini and her fellow editors would go on to produce a first issue that included selections from Pulitzer-Prize nominee and University of Minnesota professor Michael Dennis Browne and National Book Award finalist Frederick Manfred, both of whom became regular contributors to Studio One throughout the decade.

Studio One continued to flourish throughout the 1970s, publishing its first piece of prose in the Spring of 1977 and regularly featuring a wide variety of visual art, including engravings, paintings, drawing, and photography.

The 1980s proved an equally fruitful decade for Studio One. In 1980, Studio One moved to an annual publication schedule. The 1982 issue began an annual tradition of featuring artist interviews, showcasing the work of Minnesota novelist Jon Hassler. Subsequent issues would go on to feature renowned visual artist Philip Morsberger, painter-in-residence at Oxford University, Harvard University, and Dartmouth College, among others (Morsberger also contributed drawings and sketches to Studio One), as well as poet Barton Sutter. Issues in the later 1980s also showcased longer prose for the first time in Studio One's history, a tradition that would continue throughout the 1990s.

The 1990s continued to demonstrate the high quality of Studio One's publications, as issues featured work from authors such as Bill Meissner, Mara Faulkner, and Larry Schug. The 90s also saw the release of the first full-color editions of Studio One, allowing for expansion in the visual arts, particularly photography.

The 2000s witnessed a continuation of this tradition, as Studio One still highlights quality poetry, prose, and art from the CSB/SJU community and around the world, constantly striving to live up to Clare Rossini's original dictum that "art is the life current of a community."