A Monk’s call to Teach, Form and Integrate

Father Efrain Rosada arrived at Saint John’s Graduate School of Theology and Seminary in 2008 with a desire to immerse himself in monastic discipline. He’d been considering pursuing an advanced degree for some years prior to taking his monastic vows and had discussed the idea several times with others at his home monastery in Mexico City. Shortly after taking final vows to become a monk, Father Rosado was encouraged by the administrator of his community, Tepeyac Abbey, to pursue a Master’s degree in Monastic Studies. As the Tepeyac Abbey administrator was also a monk of Saint John’s Abbey, the SOT/Sem was naturally suggested as one of the two options for Father Efrain to pursue his studies, the other being the Institute of St. Anselm in Rome. Because he was already knowledgeable in the English language, Father Efrain knew that he would be able to pursue his coursework immediately at Saint John’s. Additionally, St. Anselm’s is a college and not a monastery, and Father Efrain wanted to continue to live IN a monastic community to experience the real discipline of that life. After his first year of study at the School of Theology and Seminary, Father Efrain realized that he wanted to remain in the Saint John’s community and requested to transfer permanently to the Abbey here. He was granted permission and obtained a residency visa allowing him to become a member of Saint John’s Abbey community. Shortly thereafter, in 2010, Father Rosado completed his M.A. in Monastic Studies program from the SOT/Sem.

Father Efrain’s goal in pursuing a Master’s degree in this area was primarily to teach the topic, along with spirituality, in parishes and schools, and also to work in areas of formation within the monastery. He’d always been involved in related areas while with his Benedictine community at Tepeyac Abbey in Mexico City, and even as a young man before joining the monastery he had volunteered with those ideas in mind. Father Efrain grew up in Mexico City, moving there with his parents when he was two years old. He attended university and obtained a degree in civil engineering. He worked in the public sector as an engineer in and around Mexico City for nine years. While being educated and working as an engineer, he had always felt an attraction to the Bible and prayer, and for helping and teaching others. He frequently visited and volunteered with a group of Dominican friars in Mexico City in those years, and eventually felt called to a religious life. During the years of volunteer service and feeling called, Father Rosado considered joining the Dominican monastery with which he was connected and to whom he gave so much of his time. But one of the friars gave him the Rule of Benedict one day, and he fell in love with the book. When he asked if there was a Benedictine order nearby, Father Efrain was directed to Tepeyac Abbey on the outskirts of Mexico City, and after a few years of discernment with the Benedictine’s there, Father Efrain chose to join them. He was a member of that community for seven years before taking his final vows.

While Father Efrain was able to realize his goals after completing his Master of Monastic Studies by becoming part of the formation committee for the Abbey, through teaching these topics to monks in formation, and by working for several years at Saint John’s Prep School in campus ministry and teaching theology subjects, more was in store for him. After some years of engagement with the Prep School, Abbot John Klassen told Father Efrain that he would be a good candidate for ordination. Following a period of reflection and contemplation, he chose to pursue this path and returned to the SOT/Sem to obtain the required Master of Divinity degree, completing the degree in 2017 and being ordained as a priest in May of that year.

Since his ordination as a Benedictine priest, Father Efrain has focused his work most intently toward Hispanic outreach in central Minnesota, specifically in the Cold Spring and Rockville parishes where there are significant Latino populations. An immigrant himself, Father Rosado recognized the need for ministry to Latino immigrants in the area soon after coming to Saint John’s to pursue his first Master’s degree in 2008. At that time, he was introduced to the work of Casa Guadalupe, a ministry outreach organization centered at St. Boniface Church in Cold Spring. Informally started in 1997 when both Saint John’s Abbey and Saint Benedict’s Monastery formed a partnership with St. Boniface, it was created to minister among the Latino population and was a natural center for outreach. Evolving over time to eventually be established as Casa Guadalupe, it served thousands of Latino families in the area. However, with its closure in 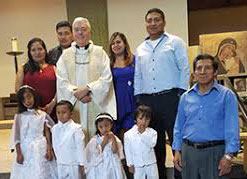 2014, a gap has formed that Father Efrain is now attempting to fill with the creation of a new outreach center called Casa San Benito, or House of St. Benedict, at Saint John’s Abbey. For over a year, Father Efrain has been focused on relocating the services that Casa Guadalupe once provided over to the new center at the Abbey. As coordinator of the program, he is revitalizing ministry to Latinos, mostly newcomers to central Minnesota, who need support for not only spiritual matters, but also to help in economic and social areas, much of it communicated by necessity in Spanish.

While there is some resistance to his Hispanic ministry and outreach, which Father Rosada is striving to overcome, this work is not new to area communities and is essentially well-supported. Masses in Spanish are now common in area parishes, particularly in Cold Spring. Cultural festivals are occurring with more frequency, as well, to share the Latino culture with the entire community. And Father Efrain is constantly seeking out new opportunities that will continue to incorporate all populations together, like bringing more Latino youth into the Youth in Theology and Ministry program at Saint John’s. Additionally, the SOT/Sem has partnered with the Diocese of St. Cloud to offer the Emmaus Institute for Ministry Formation, which has over 50 Spanish-speaking participants taking spiritual formation courses in both Spanish and English languages.

Father Rosado invites everyone to be part of the Casa San Benito project and in Hispanic outreach in general. It is for the benefit of every community to live in a multicultural environment to enrich our lives every day in all aspects. Promoting the integration of the Latino community, of any community, with a goal of interculturalism, enables people to come together in mutual respect and appreciation for each other and the gifts we all bring.