Understanding Holiness: The Sanctity of Spirit and Space 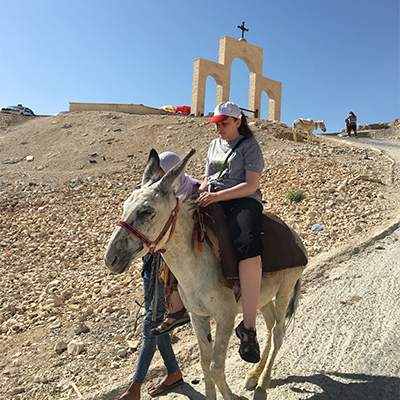 In reverence, we partake of the Precious Body and the Precious Blood, we kneel before our Lord to adore and glorify and praise Him. We recognize holiness in that space, as we join in peaceful communal prayers. But where else do we find holiness? Is holiness restricted to peaceful prayer, or are there other places or experiences whose holiness is hidden? What makes a place holy — the physical space itself, or the encounters within that place?

These were questions I asked myself when I visited the Holy Land for the second time in the summer of 2017. My first trip to the Holy Land took place in the winter of 2013 with a group of peers from Saint Mary's University. I was embarking on a spiritual pilgrimage, where for the first time I was able to make a tangible connection with places I had only previously heard about in Scripture. My heart was continually moved by many things: the awareness that I was walking in the footsteps of Jesus during his life on Earth, the kindness of the people, going into churches to pray, and holding the baby Jesus from the life-size Nativity scene. I was preparing to receive the Sacraments of Initiation at the time, but this was the first time God's grace was revealed to me through this profoundly sacramental pilgrimage. I left with my heart burning, and prayed to God that I would one day return. Upon finding out about the short-term study abroad trip to the Holy Land with the Saint John's School of Theology, I felt my prayers had been answered. During the first trip, I had found the holiness was in being physically present where Jesus had lived and taught — touching the walls or rocks upon the ground, treading the well-worn paths, feeling the various statues with the awareness of what or whom they represent. What better way, I thought, to keep the light burning in my heart than to return to the place where I was joyfully surprised by God's grace?

Now, however, with the growth and change of my journey from a tentative catechumen to a theology graduate student intellectually and spiritually immersed in my faith, I experienced holiness in a different way the second time around. Of course, there were the practical and tangible things that were moving in themselves: touching the statues, walls, and stones at the Holy Sites, walking the cobble-stone streets, and building relationships with the friends whom I had accompanied on this trip. Yet, it was not the physical spaces themselves that I found holy, but the presence of God incarnate in these places, which I sensed in many of my encounters.

Though fruitful in many ways, the trip was not without its challenges. Each day was arduous, involving miles of walking on rough terrain such as mountains and steep rock faces, but I moved forward with a stubborn, intrepid determination, not wanting to be limited by my lack of sight. Because I was in an unfamiliar place which required me to be much more dependent than I was accustomed to being, I felt frustrated by a lack of freedom. Despite being in the Holy Land, my soul was thirsting. In a moment of intimate solitude in Jesus' tomb at the Holy Sepulcher, I leaned my cheek against the cool marble and whispered this to God. Sometimes, when walking the streets of the Holy City, where cars and pedestrians intermingled, where one could not walk for ten feet without being accosted by aggressive salespeople, it was difficult to associate such a chaotic place with holiness. These were not exactly what I would call spiritually edifying moments. Yet, I learned the hard way that holiness can be found in chaos as well as in being challenged. Even during the most chaotic moments, on the most challenging days where tensions climaxed, I felt reassured by the presence of God. Even the places where I felt most bewildered and afraid I recognized as grace-filled, for the presence of God was surely in these places, and wherever God is present is holy ground. 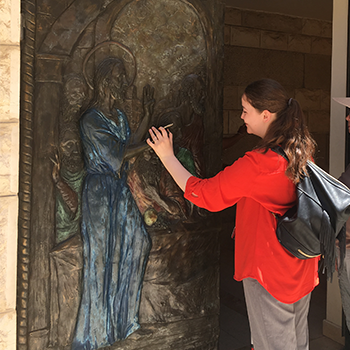 I was also challenged by the fact that people in the Holy Land treated me differently due to my lack of sight. I typically do not appreciate extra attention because of this, so being treated as if my blindness made me special was uncomfortable for me. However, I understood that this was a cultural difference in the Holy Land, that showing mercy to those who are considered less fortunate (though I do not place myself in this category) becomes an opportunity to receive God's grace. I cannot count the number of times I was approached by someone who asked to pray for my sight, or suggested that I cleanse my eyes in the River Jordan. Instead of being offended or refusing their prayers, I would ask them to pray that my eyes be opened spiritually, and would return their blessing with gratitude.

As it often happens, it seemed that each challenge was followed by an experience of God's grace. On one particular day, the group visited the Church of the Nativity in Bethlehem. The church is particularly well-known for the carved replica of the Star of Bethlehem, the star that shone on the night of Jesus' birth. I was helped by a kind gentleman named Abdo to enter the grotto in the lower level of the church to touch and kiss the Star, and was touched when he assured me repeatedly that he would hold me in prayer. Abdo then shared with me that he had a daughter without sight to whom he was deeply devoted. Graciously, he invited me to place my fingers in the holes of a pillar in the church and pray to Our Lady. Touched by this encounter, I prayed and wept, seeking comfort from Mother Mary but also giving thanks to God for this blessed encounter. I believe that Abdo was a true manifestation of God's grace for me, the sweet refreshment for which my spirit longed.

Despite having to find holiness hidden in challenges and chaos, I also found other experiences to be holy. I found holiness in simple, joyful moments, when singing the music of my spirit in the church at Bethany, or listening to the rushing waters of the Mediterranean, collecting sea shells at the shore, riding a donkey and feeding it apples, and sharing companionship and solidarity with my friends in the group. I found holiness in gratitude, not only to my peers for being reliable, trustworthy companions, but also to Father Michael. As I sat beside him to examine yet another building he had constructed from the wooden sticks he used to demonstrate certain architectural designs, I understood the effort he put forth to make sure I gleaned as much from the experience as my sighted peers. I found holiness in the fervor of prayer, in reflection, and in the profound moments of peace in the midst of intensity that I knew could only come from God. Above all, I came to recognize that holiness is not only about a physical space, but about how God works through you as you move through that space. It is not the pew upon which you pray that is holy, but rather the work of the Holy Spirit within you as you pray.

My understanding of holiness has changed a great deal since my first excursion to the Holy Land. There is a certain holiness to visiting sites that have been venerated for thousands of years. At the same time, God revealed to me an entirely different side of holiness I had not known before. I learned to find holiness, and God's grace, in the midst of chaos and challenges, as well as in joyful moments. For wherever God is present is holy, even if the holiness is somewhat hidden. Each excursion brought forth its own spiritual graces, as well as important lessons. During the first trip, I came to understand something about holiness and grace. After this trip, I know that holiness is not only in those still, quiet places, but also in the chaos of the old cobble-stone city streets, though challenges may present themselves along the way. Overall, experiencing God's presence through the beauty and brokenness, joys and challenges, and peace and chaos during this trip has enkindled in my spirit an enduring flame. It is through God's grace in this encounter that I have come to know the sanctity of spirit and space. 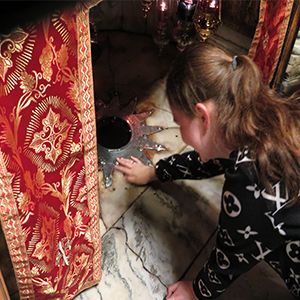 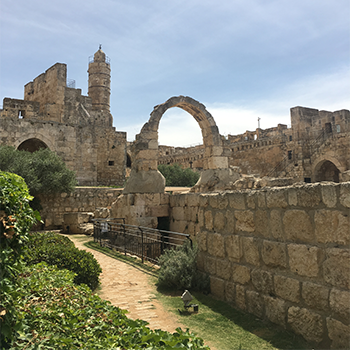