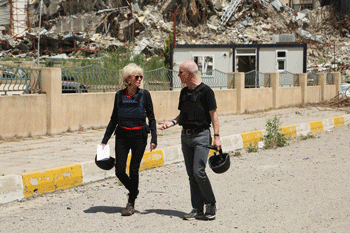 “60 Minutes” news correspondent, Lesley Stahl, interviewed HMML executive director, Fr. Columba in Iraq, where HMML is partnering with displaced Iraqi Christians to digitize thousands of manuscripts that document the region’s culture and history. These collections are at risk of disappearing because of war, looting, disasters and neglect. 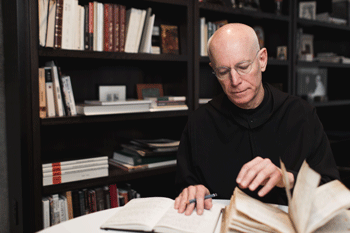 Benedictines believe that understanding history is vital to the human experience and that preserving ancient documents is critical to this understanding. The Benedictine movement of the sixth-century preserved ancient texts that served as a catalyst for new ideas and intellectual growth. Monastic communities preserved and shared these texts by handwriting new copies, making monasteries centers of learning.

This is where HMML’s work becomes vitally important. Manuscripts historically were humankind’s best means for communicating its beliefs, history and most meaningful cultural achievements. The manuscript collections HMML is digitizing and making accessible contain the record of a diverse convergence of historic cultures, languages and religious beliefs. HMML's work gives us the perspective we need to understand and address the difficult challenges we are facing today, and it is broad in its outreach. HMML is currently digitizing both Christian and Islamic manuscript collections at 16 fieldwork sites in 11 countries.

Fr. Columba brings his expertise in languages and cultures into the classroom at Saint John's School of Theology and Seminary. As a scholar of Monastic Studies (Early and Medieval), and Eastern Christianity, Fr. Columba's work in the field surfaces in his instruction, where he challenges his students to explore the psychological and spiritual insights of early Christian writers. This summer Fr. Columba is teaching a course on Passions and Prayer: Early Monastic Insights into Human Psychology and Spiritual Practices.