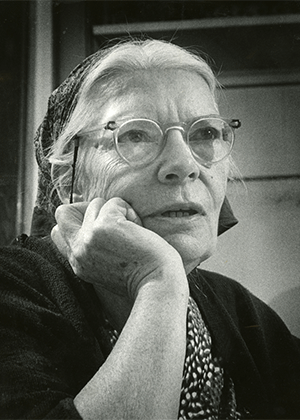 Marking the 120th anniversary of Dorothy Day’s birth, Saint John’s School of Theology and Seminary and the Liturgical Press were honored last week to host Patrick Jordan, long-time friend of Dorothy’s and author of LP’s 2015 publication, Dorothy Day: Love in Action. Jordan spoke to a captivated audience about Day’s life and legacy, giving special attention to her close relationship to the Benedictines of Collegeville.

Day was a Benedictine Oblate and frequent visitor to Collegeville. Jordan emphasized the connection between Benedictine spirituality and the Catholic Worker Movement, particularly the notion of “ora et labora.” While the dignity of manual labor is a well-known and obvious tenet of the Catholic Worker, prayer was equally, if not more important to Day and her co-founder, Peter Maurin.

Jordan read from a letter Day wrote to Abbot Alcuin Deutsch, expressing her and Maurin's excitement and eagerness to participate in the work of the liturgical movement. Roughly one year after starting the Catholic Worker, Day wrote: “We have been trying, from the start of our work to link up the liturgy with the Church’s social doctrine, realizing that the doctrine of the mystical body of Christ is at the root of both.”

Despite this positive relationship with the monks at Saint John’s, Day refused to accept an honorary degree from the university. She never publicized her response, but Jordan read from her letter of refusal. She explained carefully that despite her gratitude and affection for the community, her opposition to the Vietnam War and the draft was incompatible with receiving such an honor from a school with an ROTC program and other forms of government support. Jordan mused that her refusal was also due, in part, to her keen awareness that she was not a scholar. Despite having profound respect for the profession, and the role of theologians in particular, Day knew it was not her vocation.

Responding to a question about what challenge Day would give to students and scholars of today, Jordan recalled her statement in 1938: “The Mass is the most important work of the day. If I can just remember to do that well, as well as I am able, everything, everything else will take care of itself.” Whatever one’s vocation might be – activist, scholar, parent, etc., Jordan fondly and confidently recalled, “She said if you had a sense of presence, all sorts of things opened up to you.”

Day, whose cause for canonization is well underway, would have celebrated her 120th birthday on November 8, 2017.