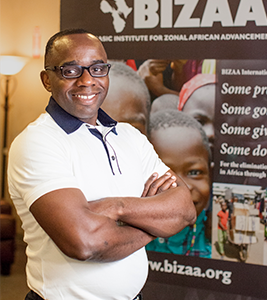 For 2009 M.Div. graduate, Okey Anyanwu, what started with a few loaves of bread and solidarity has now grown into an organization that has educated over 116 children in West Africa in just four years.

Anyanwu is the founder of BIZAA, an organization dedicated to educating victims of child labor, child trafficking, and domestic servitude in Nigeria. BIZAA’s mission is to stop child labor by rescuing current victims and providing education, technical training, and job placement to end the cycle of poverty and forced labor.

Though the organization is quite successful now, it started with humble beginnings. Anyanwu was born into a family of eight in Nigeria. His family was fortunate enough to send all their children to school. Anyanwu recalls seeing children on the sides of the road selling items on his way to boarding school; he always wondered why these children were not in school.

He didn’t understand until he was about 14 years old that these were child laborers, forced into the trade to earn money so that they could eat. Many of these children are abused by their owners, get kidnapped, or get hit by cars on the side of the road and killed.

This was his call to action.

“So I thought to myself if nobody is going to do something about this that's what I'm going to do when I grow up. I’m going to try and stop this nonsense. I can't keep praying for missing children and dead children and seeing these kids on the road. Something has to be done,” promises Anyanwu. 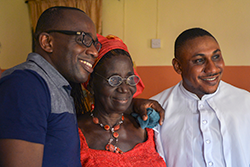 He started in the only way a 14-year-old whose father owned a bakery could.

“You know I kept thinking I don’t have money to give them, but I have all these snacks… I would watch for my parents to leave the bus stop and as soon as they left, I would open my bag and I would hand out all my snacks to them. And then I went back to school, and when I got hungry and I would start begging from other students,” Anyanwu laughs.

What others described as this ‘bizarre’ behavior became the inspiration for Anyanwu’s future of founding BIZAA.

It would be a long road to BIZAA’s official start though; one that would take Anyanwu across the world receiving various degrees in hopes of becoming a priest. It wasn’t until he immigrated to the United States and found his home at Saint John’s that his mission for BIZAA became so clear. 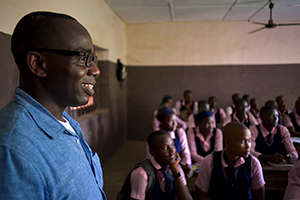 It was a hard decision for Anyanwu to leave behind his goals of becoming a priest after devoting 12 years of his life to the study, but he always felt called to do more in the work of social justice ministry. Anyanwu credits Saint John’s with inspiring his transition into this work from their commitment to experiential theology and teaching of Catholic social justice.

“Saint John's opened a whole chapter that pulled me in and gave me a sense of belonging.”

After graduating from Saint. John’s School of Theology and Seminary he became a Pastoral Minister at St. Vincent de Paul Catholic church in Brooklyn Park, MN. This is where he would later introduce social justice ministry to the church and found BIZAA in 2013.

As Anyanwu moves forward with BIZAA, his primary goals include building a permanent campus for vocational school and introducing new trades into the school. BIZAA expects its first graduates of vocational schooling in 2018, introducing a class of young adults professionally trained in computer engineering into the community.

When asked if Anyanwu received scholarships for his master’s program studies, he says that he attended Saint John’s completely tuition free. Now, he strives to give that kindness back to the young children he seeks sponsors for in Nigeria. “Saint John’s prepared me in a very powerful way to give back, because the kindness I received at Saint John's was a message to make other people happy,” Anyanwu states. 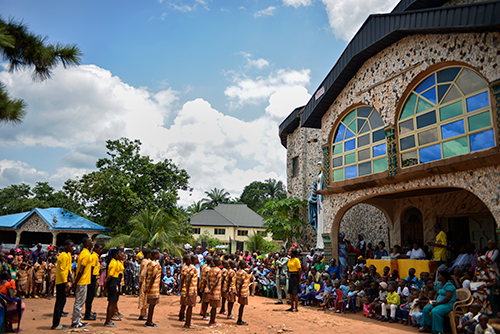