All comments are available in their entirety for download here. 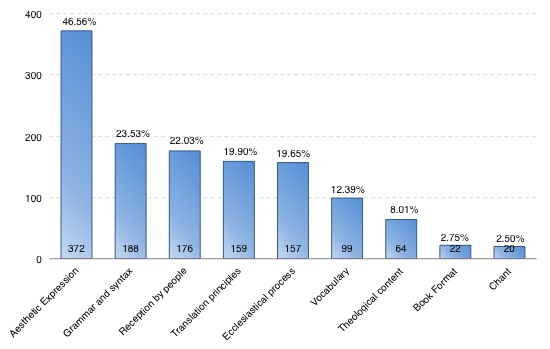 * Some comments are included in one or more categories; percentages in the graph are based on the no. of comments in a particular category / total comments. So "46.56%" indicates that of all 799 comments, 46.56% of them treat the issue of "aesthetic expression." 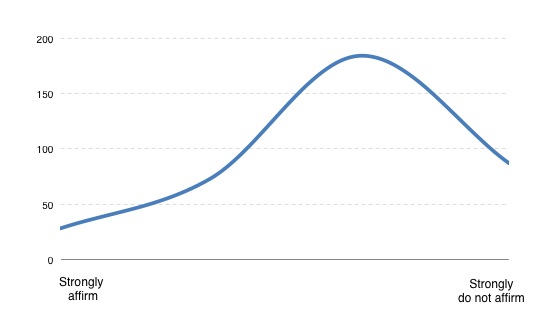 More than two-thirds of the 372 respondents who commented do not affirm the aesthetic expression of the new Missal. Respondents described prayers as "stilted," "awkward," "difficult to proclaim," "contrived, not sacred," "clunky," "lacking a lyrical beauty," "cumbersome," "distracting," "awful," having "no poetic feel," etc. 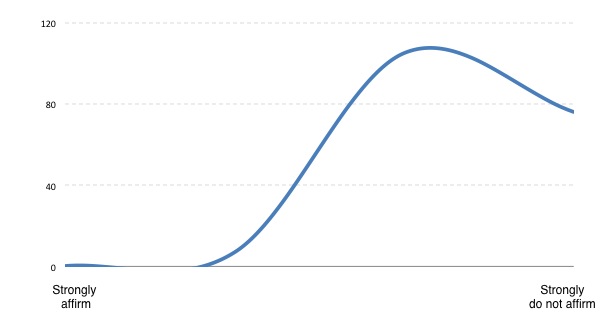 The vast majority of those who commented on the Missal's grammar and syntax did not affirm it. Many comments expressed concerns that the Missal's English is not idiomatic, breaks too many rules of English grammar, and employs the Latin rather than English syntax so much so that the Missal is simply "not English." Commenters wrote unfavorably about the "many dependent clauses," "run-on sentences," "many commas," and "awful phraseology" that left one "tongue-tied." 24 comments singled out the Missal's collects, calling them "horrendous," "overwritten," and impossible to diagram. One noted that the difficult phrases were challenging to render into sign language when he celebrates Mass for the deaf.

No one affirmed the grammar and syntax in the Missal strongly, but a handful admitted that the language could use just "minor tweaks" and preferred the new translation overall. 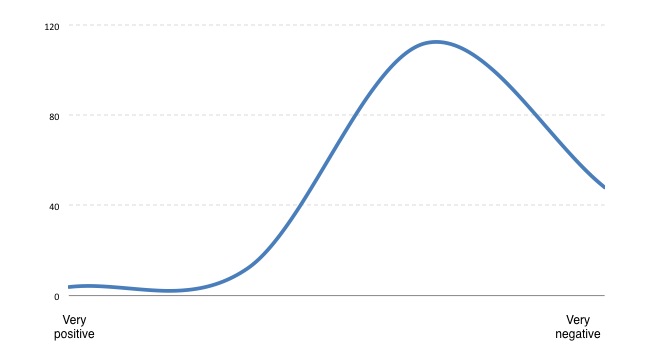 Over 90% who spoke of reception by the people expressed concerns that the language was "difficult to pray" and "difficult for people to understand." Commentators said the prayers were distancing the faithful from the priest and God, did not engage them, "do not resonate with the ears/hearts of the faithful," "made no attempt to include the people," are "inaccessible," do not allow true full and active participation, and are fueling a "return to passivity" in liturgy. Laity have voiced dissatisfaction and dislike for the Missal, but some seem to have "reluctantly accepted it" or are "enduring it remarkably well" (which one priest calls "a tribute to their faith and desire to worship"). Many priests also claimed to have been approached by laity to explain certain prayers and words.

The few who perceived a positive reception from the people said the new translation has "not been problematic" and that some "like them very much"; the Missal has made people "think and reflect more deeply," presented a "wonderful opportunity for catechesis," and made Mass "more reverent." 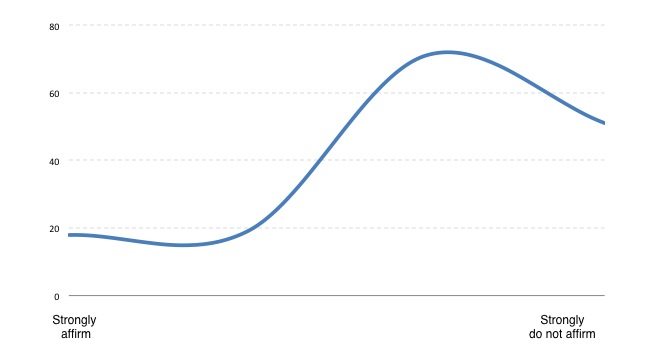 Over three-quarters of those who made allusions to the Missal's translation principles did not affirm them. Some claimed the "principle of formal equivalence is faulty," did not agree that a "one size fits all" translation is best, and said the Missal was a "transliteration, not translation." Several were concerned that the English language was made to conform to Latin syntax. 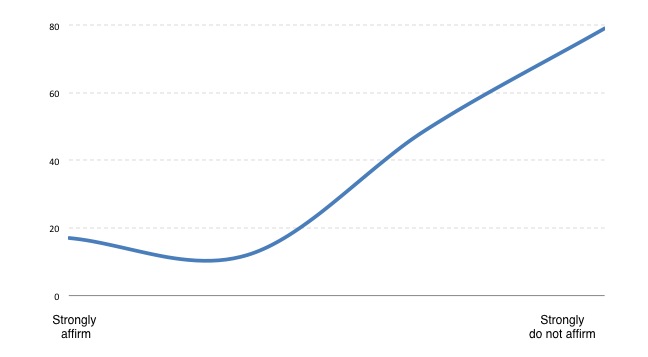 About 80% of those who referred to the ecclesiastical process of the new Missal did not affirm it. Several raised concerns that Rome had not respected the role of Bishops, citing a lack of collegiality between Rome, translation committees, and Bishops in the process. The Missal came off as a "top down" imposition on the faithful for many. Some felt that the lack of consultation with priests was a mistake; they could have offered opinions as celebrants. A couple noted that the collaborative work found in ICEL's original was ignored by Rome — "beautiful and proper prayers were submitted but rejected by the Vatican" and "comments and suggestions were almost universally ignored in the final edition."

The minority who affirmed the ecclesiastical process favored Rome's centralized authority and noted that the "Church is not, nor has she ever been, a democracy." Some felt that priests need not be consulted - there are too many to consult and they "do not see the point"; after all, a priest's "first duty is to obey," and "most priests have absolutely no expertise in this area." Approximately 80% of those who made comments on the vocabulary of the Missal do not affirm it. Words were described to be "archaic," "lofty," "distracting," and "foreign." Some words like "graciously," "laud," and "we pray" are repeated too often. Among other words identified as unfavorable are: "consubstantial," "beseech," "prevenient," "chalice," "oblation" and "dewfall." 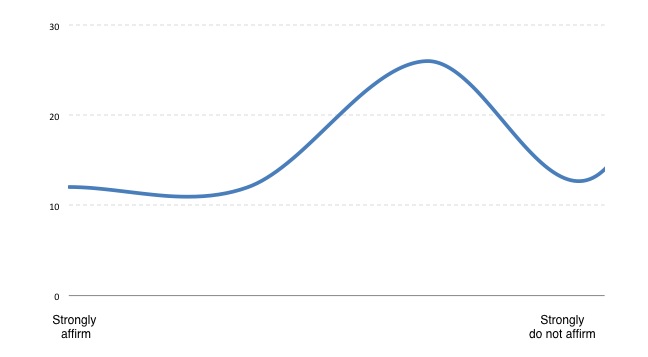 About 60% of commentators who alluded to the Missal's theological content are not in favor of it. Some felt that the Missal reflects "old theology," expresses a false "holier than thou" image, is "disconnected from real life," emphasizes "sin" and "hell" (as in the creed), and contains some "heretical" theology. A handful felt that the language sounds more like "theological statements" than prayers.

The other 40% favor the Missal's theological content for its fidelity to Scripture and biblical imagery, inclusion of sin, and increased "theological richness." 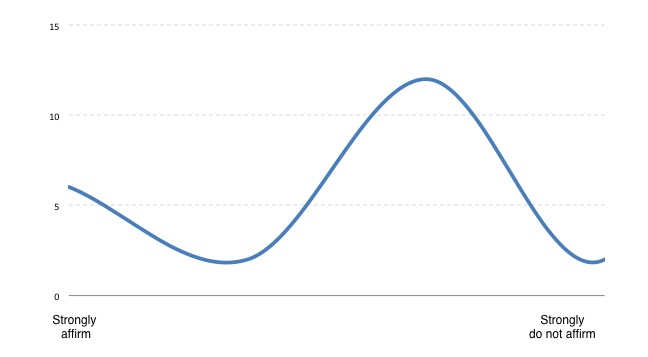 More than half of those who made mention of the way in which the book was formatted do not like the Missal. Some comments were publisher-specific: "art in the wrong places" and different pagination across publishers. Others noted that scattered prefaces are confusing and offered opinions regarding which prayers and chants are placed in the appendix.

Those who wrote favorably of the Missal praise the way the prefaces are placed with the Mass propers and mentioned liking religious art in the Missal. Just over half of those who commented on the Missal's chant did not affirm it. One claimed the chant was difficult to learn. Some felt the chant was boring, have no beauty, and had awkward cadences. One suggested simpler versions of preface chants.

Among those who affirmed the chants, one made mention that basic chants were being used at daily Mass. Others mentioned learning chants through listening and repetition.

For ongoing coverage and conversation about this survey, visit the Pray Tell Blog.