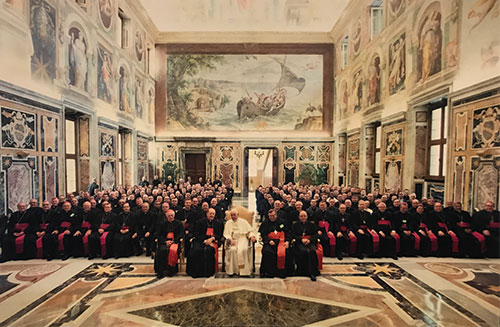 Father Michael Patella, rector of the Saint John’s Seminary, had a unique fall break experience. Although his busy schedule kept him from sightseeing and sampling the local faire, his time in Rome was a once-in-a-lifetime experience.

Fr. Patella met with over 250 other seminary rectors from across the world. The Congregation for Clergy organized the meeting to update rectors and seminary staff members on a new program for priestly formation, which Pope Francis wishes to implement.

The Pope’s new curriculum stresses the human and spiritual formation of seminarians. The rectors also had the opportunity to discuss other issues surrounding Catholic seminary formation.

“The experience was very interesting. I met with presenters, and then afterward, talked to peers and exchanged notes. Real work was done in those discussions,” said Fr. Patella.

The week ended with a Mass at Saint Peter’s Basilica. Afterward, the Pope held an audience for the seminary rectors. The Pope spoke to the group and emphasized the importance of seminary formation.  When he completed his address, he met with all 250 rectors individually.

“On the way up the aisle, I practiced my Italian so I could thank him for the good example of charity he has given to the Church.  I was nervous; I had never before spoken to this Pope or any other Pope for that matter.” After meeting him, Fr. Patella realized his worries were misplaced.

“He was very disarming. On one hand, he is the leader of the entire church, but on the other hand, he seemed like a good friend, enthusiastic to meet everyone. He was all smiles throughout the whole thing”.