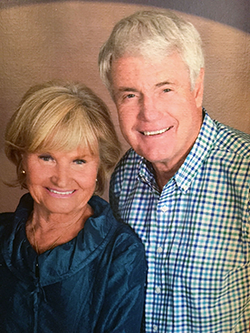 Throughout the past 18 years, Dan and his wife Lynn Fazendin have supported the School of Theology and Seminary and worked toward shaping the school into one that attracts new students and achieves exceptional graduate work at a time when the church is struggling with declining numbers of new priests and monastics.

The two originally discovered the program in 1999 when former Saint John’s President Br. Dietrich Reinhart recruited Dan to join the first School of Theology and Seminary board. Since then, they have both become more involved in supporting the school—Lynn joined the board in 2002 and is currently working on the membership committee while Dan chairs the board of regents.

Dan, a Saint John’s graduate of 1967, says the School of Theology and Seminary has a stronger connection to the Saint John’s Abbey than people might realize. He says that despite the modest size of the theological graduate program, having a connection to Saint John’s allows the school to have a big voice in the academic community. Dan also says this connection gives the School of Theology and Seminary the opportunity to do beneficial work—both locally and globally—which includes making women an integral part of the graduate program and assisting in the training of deacons and ministers.

“While many people in the church may look longingly at priests and nuns…the fact is, there are getting to be less and less of those people,” Dan says.

Dan sees his family’s support for the school as a critical service to the church during a time of change. Lynn says that strengthening education through the graduate program could help the church move forward and gain support.

One of Lynn’s biggest priorities is making sure that students from both Saint John’s and Saint Ben’s know that the program exists and know about the impactful work that its graduates do.

“I think it is so very, very important that this school thrives and that it is connected to the Abbey which is such a great asset for all students whether they be lay or future ministers in the church,” Lynn says.

These past few years of working on the board of regents and supporting the School of Theology and Seminary has inspired both Lynn and Dan on a personal level. Their genuine care for the students and faculty and their aspirations for the future of the school has helped strengthen their own spiritual lives.

“We have spent a lot of time working on this and it’s been a joy to work on,” Dan says. “It has been a blessing on our lives and, for me; it has become the spiritual center of life.”

“The Spirit is alive and well…,” Lynn says, “and I certainly feel that immensely when I am up on campus.”