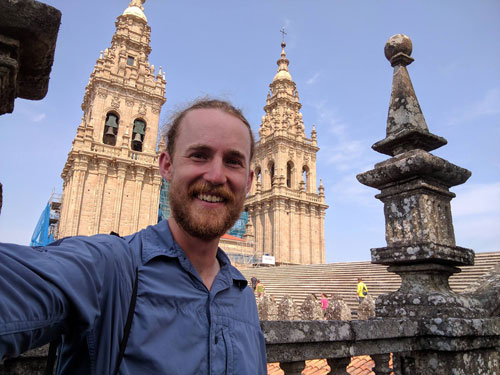 Being one of the most important Christian pilgrimages since the middle ages, many Christians and non-Christians alike have walked the path of the Camino de Santiago to the remains of St. James, who—as legend says—is buried in what is now the city of Santiago de Compostela. This past summer recent SOT graduate Chris Morgan led a group of nine undergraduate students from Saint John’s and Saint Benedict’s to take part in the rich history of pilgrimages on the Camino.

To prepare for the pilgrimage, students took a course with Chris called Christian Spirituality, in which they read the book Backpacking with the Saints by Belden Lane. As Chris explained, “the central goal of the course was to equip students with tools so they can navigate their own spiritual journeys,” highlighting the wisdom of not only the Christian tradition but also other spiritual traditions.

Though Chris would be quick to point out the pilgrimage starts whenever you want it to start, the actual walking part of the pilgrimage started on the border of France and Spain—where most people start walking the Camino—at St Jean Pied de Port. From there, Chris’ group walked together for four weeks, walking over 420 miles. Though the program officially ended in Sarria, the group went on to complete the Camino by walking to the Santiago de Compostela.

“The Camino kind of found me, which I am really thankful for,” Chris explained. “It really helped me to put words to the dynamics of my spiritual life, as far as walking the journey, continuing to walk the journey, walking with other people, and being in relationship with people and the earth.”

Though Chris was in charge of making sure the students that went with him were able to make this Camino a spiritual journey, he also came to the pilgrimage with an intention of his own.

“I realized that the day we were supposed to fly home from Spain was the day after the anniversary of my mother’s death. So that became really important for me to dedicate this to her, as my personal intention for the Camino.”

“Part of my life’s story is that when my mom died, I turned to other people and other things to find the love that I had lost. There are all kinds of stories but it basically shows you that I never really mourned her death, I never really came to peace that that relationship is over and I can’t get her love back, I can’t find it anywhere else. It’s important for me to mourn that, to grieve it and to let it go. So, I took that intention to the Camino.”

Chris was quick to point out how important his formation and education was at the SOT to lead this group of undergraduate students on the Camino.

“I felt very empowered to make this happen because of the training I got at the School of the Theology, the support I received from staff and the support I got from the community there. That’s very clear to me that it was a huge detail.”

Chris will be presenting his method at a pilgrimage symposium at the College of William and Mary October 6-8th to help other leaders prepare to lead pilgrimages.