On Farming Ministry: Soil and Soul

"There are so many different settings to do ministry.... I work for a group of Catholic women growing food, it is my ministry, and I use my Master of Divinity degree in what I do." 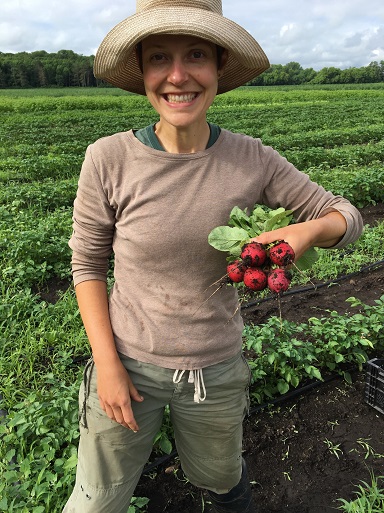 Using these themes Ritger combined her unlikely interests in organic farming and spirituality to create her primary ministry—farming ministry, which she says stresses stewardship of the land, building community, supporting local food systems, promoting the value of eating seasonally and being in a close relationship with the land.

Ritger emphasizes the importance of farming ministry in her book “Benedictine Living” and through her current work as the garden manager of the community supported agriculture (CSA) garden for the Sisters of the Order of Saint Benedict (OSB) in St. Joseph, MN.

This three-acre diverse vegetable farm, which has been thriving for 24 seasons, uses a management model rooted in the Benedictine mission. Monastics and students from Saint Ben’s and Saint John’s all help contribute time and effort each season to the community farm.

“It’s a model of farming where the people who are eating the food are in close relationship with the farm itself,” Ritger says. “It really fits with the Benedictine mission of building community and doing stewardship work connected to community.”

Ritger found the OSB garden manager position through a friend after she decided to phase out of her work in campus ministry. She planned to work at the garden for a year in transition between her previous work in campus ministry and her next big career. Instead, she ended up staying for seven seasons, and she hopes to stay for many more.

She says the SOT/Sem allowed her the opportunity to explore and express her spirituality in different integrative ways—even through agriculture and gardening.

“I know that there are people that would say my expression of Catholicism is not the orthodox Catholicism or not the true Catholicism, but I think that being at the SOT/Sem showed me that the Catholic Church really is a very big place and that it is home for me too,” Ritger says.

Ritger says her Master of Divinity program allowed her to study scripture, doctrine and church history while also reflecting upon how they each inform individual faith and the modern church. She says her degree allowed her to prepare for a life in ministry and consider how she could take her knowledge from the SOT/Sem and share it with others. When looking into ministerial paths, Ritger encourages current students to consider all of their interests and see where they can intersect them.

“There are so many different settings to do ministry.... I work for a group of Catholic women growing food, it is my ministry, and I use my Master of Divinity degree in what I do,” Ritger says. “I want people to think big and broad. If they are drawn to theology and ministry but are also drawn to being a baker or a potter or whatever it is, [they should] live that and find ways of integrating that.”

One of Ritger’s favorite aspects of the SOT/Sem is their weekly convivium, a midday prayer and meal accompanied by spiritual reflections from faculty, staff and students.

“Now in my everyday life I wish I had…an opportunity to do that every week with people that I work with,” Ritger says. “I think those are the times that I felt very connected to the school.”

Ritger says in the future she wants to see more women becoming empowered and trained in the Master of Divinity program, especially since the SOT/Sem is one of few schools to offer the opportunity to women. She also says the SOT/Sem has greatly influenced the Catholic Church by placing an emphasis on integrating a variety of religions people into the institution including men preparing for ordination or diaconal work, sisters, lay people preparing for academic or ministry work and students.

“There are Catholic seminaries and there are Catholic graduate schools of theology, but more and more we are seeing models that are separating those places,” Ritger says. “Saint John’s is a place that continues to bring them together which I think really is a strength for the future of the Catholic Church.”