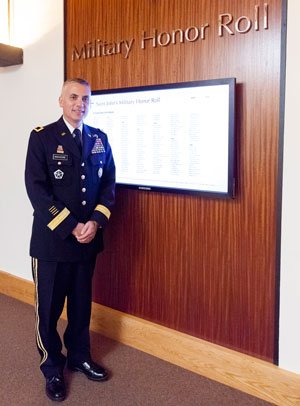 The former Military Wall of Honor at SJU has become electronic. The new Military Honor Roll was installed in November and is located in the corridor to the west of the Great Hall in the Quadrangle.

The honor roll was dedicated the weekend following Veteran's Day and lists all Saint John's alumni and monastics who ever served in any branch of the armed forces going back to the Civil War. It is searchable by name and class year.

Army Maj. Gen. Paul Nakasone '86, commander of the Cyber National Mission Force, was the guest of honor for the dedication ceremony. "One of the most important things when you serve is the idea that you are remembered," Nakasone said. "The fact that everyone's name that served across every branch of military service is captured within this honor roll is wonderful."