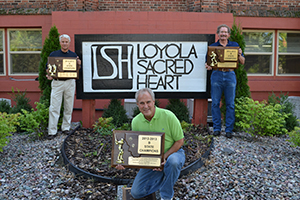 Matt Stergios '78, Dave Klein '81 and Dan Weber '72 will all retire from coaching this year at Loyola Sacred Heart High School in Missoula, Mont. These three Johnnies have more than 100 years of combined full-time teaching and coaching experience and all coached their teams to Montana state championships last year.

While more than 1100 miles separates these three Johnnies from alma mater, all three credit SJU as a major influence in their success both on and off the job.

Klein coached the Loyola Boys Golf team to its 5th consecutive state championship in the 2012-2013 season, winning by a margin of 93 strokes.  "I valued the close knit family experience that St. John's allowed me to share in," he says.  "The friendships and personal bonds that I experienced at St. John's paved the foundation for my coaching philosophy.  The team concept plays through on our golf teams and is the cornerstone of our program."

Stergios coached the Loyola Speech and Debate team to a national record 30th consecutive Speech and Debate title during the 2012-2013 season, winning the state title by 186 points.  "The atmosphere that fostered excellence permeated my experiences there in many different phases," he says.  "From the challenging and nurturing classes, to the success of the sports teams-especially observing Johnnie football under John Gagliardi, I was deeply influenced."

Weber led the Loyola Ram football team to its first-ever state title during the 2012 season.  The football team ran the table to a 12-0 undefeated season.  He notes that the cooperation and teamwork among students and athletes was instrumental toward winning the state football championship last season. "That same cooperation and teamwork was evident in abundance in my years at Saint John's", he says.

While all three men will retire from coaching, they will continue to teach.