In fact, it wasn’t until Mike Sonntag ’95, one of Wilson’s assistant football coaches at Hill-Murray High School in Maplewood, Minnesota, brought SJU to his attention that he decided to take a look.

“He told me about how successful the academic and athletic programs have been here,” said Wilson, a 5-foot-11, 220-pound linebacker who will be a senior this fall.

“I came up for a visit and that went really well. Being at Saint John’s felt like home to me. I knew after that visit that this was the place I really wanted to be.”

“Honestly, I probably wouldn’t be here without them,” Wilson said. “All of my tuition expenses rest with me, so scholarships were the main thing I had to consider when I was looking at school where I could continue my education. Saint John’s was the top place when it came to offering the kind of scholarship package that made going here realistic and affordable for me.

“I’m really grateful for that because it helped make this opportunity possible.”

And Wilson has certainly made the most of it.

After playing on special teams and making the travel roster as the Johnnies advanced to the NCAA Division III semifinals during his freshman season in 2019, he stepped into an expanded role defensively last fall. (The Johnnies did not play games in 2020 due to the COVID-19 pandemic.)

Playing at several different linebacker spots, he was a key part of the defensive rotation, finishing the season eighth on the team in tackles with 34, including a sack and three tackles-for-loss.

“Physically, I feel a lot different now than when I got here as a freshman,” Wilson said. “I’ve gotten a lot faster and more explosive. But the biggest change is that I understand the whole defense a lot better. I know what all 11 guys are supposed to be doing on every play, and that makes a big difference.

“The coaching staff here has been so inclusive, even during COVID with all the restrictions and guidelines we had to follow. They did a great job at continuing to be accessible at all times. They figured out how to plan out practices safely, and they scheduled a lot of Zoom meetings to make sure everybody stayed connected the whole time.”

Johnnies head coach Gary Fasching said Wilson has really come into his own as a player.

“He’s got a lot of skill,” Fasching said. “He’s physical and he understands what we’re doing. He’s become one of our more vocal leaders when it comes to getting guys in the right place and calling out the formations when the offense comes up to the line.”

But his on-field success is just part of Wilson’s experience at Saint John’s. Away from the field, he serves on the football program’s leadership council and has been a big part of fundraisers for the St. Jude Children's Research Hospital and the Tackle Cancer campaign. He is also one of the team’s representatives on the SJU Student-Athlete Advisory Committee.

“He’s added a lot to this campus beyond football,” Fasching said. “He’s very good in the classroom and he’s a guy who’s well-respected by his fellow players and our coaches. He’s a well-rounded individual, he’s involved in a lot of different things, and he loves Saint John’s.

“He’s a perfect example of why we have a scholarship fund. If we didn’t, there’s a good chance he’s not here and that would be a big loss, not just for football but the whole campus community.”

An NCAA ruling granted an extra year of eligibility to all athletes because of COVID 19, but Wilson has not decided whether he will return in the fall of 2023.

No matter what, he is already eyeing a future career in finance, perhaps in analytics. This summer, he’s completing an internship with Microsoft in the financial department at the company’s corporate headquarters in Redmond, Washington.

“It’s been great so far because I’ve been able to talk to a lot of different people and see how different roles work,” Wilson said. “I’m getting some really valuable experience.”

Wilson said it is donors to the scholarship fund at Saint John’s who helped make all of this a possibility.

“Honestly, I just want to say thank you to them,” he said. “I could never have imagined being in some of the positions I am now when I was figuring out how to afford continuing my education. I know they probably hear people saying thank you all the time, but I hope they know how much we’re aware and grateful to them for everything they’ve done.

“I know that myself and a whole lot of other students wouldn’t be here if it wasn’t for their generosity.” 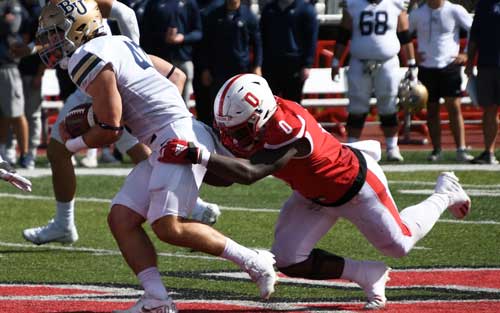