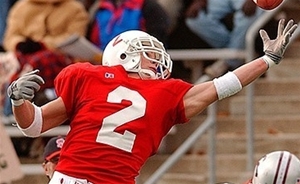 Johnnie All-American Blake Elliott '03 has been named to the 2014 College Football Hall of Fame ballot. The National Football Foundation will tabulate votes after March 31, and inductees will be announced in May. If elected, Elliott would become the first Saint John's graduate in the Hall of Fame, joining his former head coach John Gagliardi (Class of 2006).

Elliott excelled for the Johnnies for four years and ended his career as the recipient of the Gagliardi Trophy and a national championship in 2003, a season that included John Gagliardi's record-breaking 409th career victory. He holds the NCAA all-divisions record for consecutive games played with a reception, three NCAA playoff records, two MIAC records and 29 SJU receiving records. Elliott was a three-time All-American, a two-time MIAC Player of the Year and was invited to play in both the AFCA Aztec Bowl and Hula Bowl following the 2003 season.