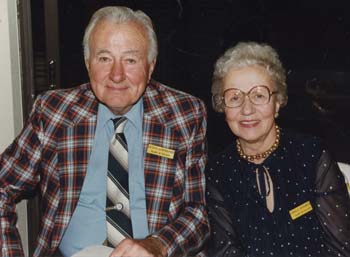 The husband and wife team of George ’28 and Isabelle Durenberger and their great work and contributions in helping shape Saint John’s University were honored Friday, Aug. 25 in ceremonies at Saint John’s.

“Big George” and the Transformation of SJU Athletics

He arrived at Saint John’s as a freshman from Le Sueur, Minn., in 1924 and quickly became a renowned college athlete in football and basketball. He was the first Johnnie named to the MIAC football all-conference first team.

Durenberger continues to have a large presence in the MIAC. Each year the top-ranked MIAC school based on cumulative performance in all sports receives the MIAC’s George Durenberger Award.

When George graduated from college, he chose to become a teacher and coach at Saint John’s instead of taking a job with Green Giant. That decision led to the transformation of SJU athletics and its role in the holistic development of SJU students. George served as Saint John’s athletic director from 1931 to 1972.

“[George] started at a time when, if Saint John’s were to win a championship, it would have been considered a miracle by some, by others as a caving in to ‘athleticism.’ Two championships in a row would have called for an investigation.”

How times changed. As of August 2017, Saint John’s has 152 total MIAC and national championships and 565 total All-Academic MIAC and Academic All-Americans.

George was an ardent advocate for expanding intramural and club sports and for lifetime fitness. He also was involved in many community-building activities, including joining with Isabelle and others to grow the Saint John’s Alumni Association. He also served on the Minnesota state board of the Red Cross, on the National Civil Rights Commission and on Governor Orville Freeman’s Minnesota State Physical Fitness Commission.

George once said, “A coach should be judged not only on his ability to produce winning teams, but also on whether or not he has made a positive contribution to the moral, mental, social and emotional growth of his students.”

After graduating from Saint Theresa’s College in 1932, Isabelle Cebulla taught the subject of business in Wisconsin. Thankfully, she brought her immense talents to Saint John’s University, married George to become Isabelle Cebulla Durenberger, and went on to help advance Saint John’s as an employee for 40 years, working in alumni relations as a tireless connector of Johnnies.

Isabelle was a trailblazer. Today women work in nearly every area of Saint John’s. That was not the case when Isabelle worked at SJU, yet she quickly became a valued partner to her colleagues and the larger community.

“Almost from the day that George and I were married on this very spot 40 years ago by Fr. Abbot Alcuin, and the subsequent almost 40 years of living on this campus and rearing our five children, I had become a sort of Mater Familia to this community,” Isabelle said during her retirement ceremony on Oct. 12, 1973.

Mater Familia ... the phrase translated to English means “female head of a household.”

Her skills of leading and bringing people together for a greater good were constants in her life. This work included directing Red Cross community drives during World War II; leading fund drives for the March of Dimes; heading the PTA in Collegeville; and helping bring together Saint John’s, Saint Ben’s and Saint Cloud State to create the May Bowle arts festival.

Much of her work involved helping build the Saint John’s Alumni Association with George, Fr. Walter Reger, OSB and others. It is that work and her commitment to making meaningful connections that helps unite generations of Johnnies today.

Isabelle greatly enjoyed gardening. Blooms will always rise in the Isabelle Cebulla Durenberger garden in her honor and in welcoming people to Saint John’s.