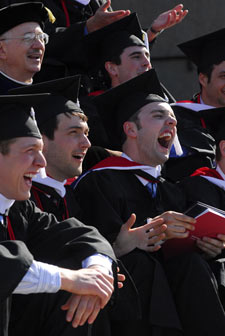 Commencement ceremonies for the class of 2008 took place on May 11 in the Abbey Church. This year's class includes 458 undergraduate men, the second-largest in school history, and 45 School of Theology ·Seminary graduates. When combined with the College of Saint Benedict's 446 graduates, this year's combined undergraduate graduating class was 904.

Also during the commencement ceremony, Saint John's Abbey and University presented its Pax Christi Award to the Most Reverend Elias Chacour, archbishop of Akka, Haifa, Nazareth and All of Galilee.

Tom Connelly, an environmental studies and Spanish double-major from Omaha, NB, was the student commencement speaker, as selected by the Saint John's senior class.

Green, as superintendent of Minneapolis Public Schools, is directly responsible for overseeing the district's business functions and academic achievement for all students. Green served on the Minneapolis Board of Education from 1993-2001 and was board chair from 1996-1998. Green has taught at Augsburg College, the College of Saint Benedict and Saint John's University, and Vanderbilt University. A native of New Orleans, Green is the author of A Peculiar Imbalance/The Rise and Fall of Racial Equality in Early Minnesota, and has contributed more than 30 articles to scholarly and popular press publications.

Jolly is president of the Science Museum of Minnesota, which is among the nation's largest and most esteemed science museums. Prior to joining the Science Museum in March 2004, Jolly was senior scientist and vice president for Education Development Center in Newton, MA. He is known for his contributions to mathematics and science education, frequently working with such groups as the American Association for the Advancement of Science, National Action Council for Minorities in Engineering, National Council for Teachers of Mathematics, and the National Science Teachers Association. He is a life member of the Society for Advancement of Chicanos and Native Americans in Science.

Chacour, of the Melkite Greek Catholic Church, is a Palestinian Israeli and an Arab-Christian. Chacour is the first Israeli to be ordained a Catholic bishop and the first Hebrew-speaking Archbishop of Galilee. He has devoted his life to education and peace, particularly peace between Israelis and Palestinians, and is known worldwide for his work on behalf of nonviolent social change. Chacour is the noted author of numerous articles and two books, Blood Brothers and We Belong to the Land. He has been nominated three times for the Nobel Peace Prize and has been awarded the World Methodist Peace Prize, the Niwano Peace Prize, the Dante Alighieri Human Rights Award, the Mediterranean Peace Award and the International Award from the Council of America's First Freedom Award. He is the recipient of honorary doctorates from Emory University and the University of Indianapolis.

As the highest honor awarded by Saint John's, the Pax Christi Award recognizes those who have devoted themselves to God by working in the tradition of Benedictine monasticism to serve others and to build a heritage of faith in the world.